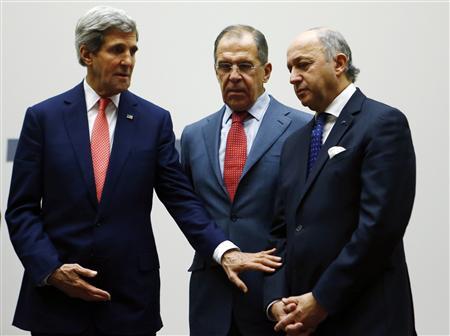 Kerry and Lavrov to meet for Ukraine talks in Geneva

Top US diplomat John Kerry has arrived in Geneva for Ukraine talks with his Russian counterpart. Kerry will also push for a ‘credible’ investigation into the shooting of Russian opposition leader Boris Nemtsov.

US Secretary of State John Kerry arrived in Geneva late Sunday ahead of discussions with Russian Foreign Minister Sergei Lavrov over the ongoing conflict in eastern Ukraine.

Kerry is expected to reiterate that additional steps – such as further sanctions – could be imposed on Russia should it not comply with the February 15 ceasefire agreed in Minsk between Kyiv and pro-Russian rebels. Moscow has always denied providing the separatists with military support.

Their meeting comes as the UN releases a report later on Monday on human rights violations in the Ukraine conflict.

Kerry, meanwhile, has added his voice to international condemnation over the shooting death of Boris Nemtsov, a critic of Russia President Vladimir Putin, and called for an independent probe into his death.

He told American news broadcaster ABC that there needed to be a “thorough, transparent, real investigation not just of who actually fired the shots, but who, if anyone may have ordered, or instructed this.”

Putin has said he will personally oversee the investigation into the opposition leader’s death.

Less than one week since accusing Moscow of lying “to my face” about the Ukraine conflict, Kerry declined to comment about whether the Obama administration believed he was the right person to head the probe.

The investigation “must pass muster in the eyes of both the Russian people and internationally,” one unnamed official travelling with Kerry said.

Following talks with Lavrov, Kerry is expected to address the United Nations Human Rights Council to stress the need “to continue to shine a spotlight on some of the worst human rights violators throughout the world,” another State Department official said.

Kerry will then to travel to Montreux later on Monday to meet with Iran’s Foreign Minister Javad Zarif to discuss Tehran’s nuclear programme. A deadline – March 31 – is fast approaching for nailing down the framework of a nuclear deal between Iran and the international community.

“We have proven that we have slowed Iran’s, even set back, its nuclear programme,” Kerry told the ABC, citing the November 2013 provisional agreement under which Iran froze most of its nuclear enrichment activities in exchange for sanctions relief.