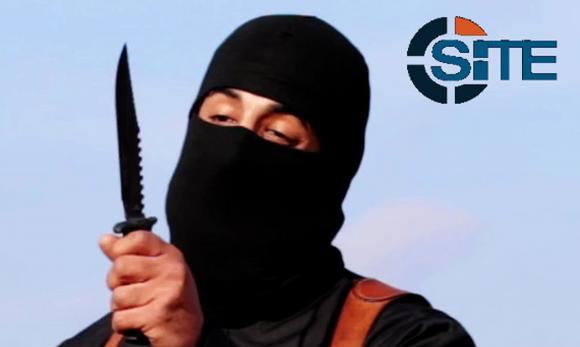 A masked, black-clad militant, who has been identified by the Washington Post newspaper as a Briton named Mohammed Emwazi, brandishes a knife in this still image from a 2014 video obtained from SITE Intel Group February 26, 2015.

(Reuters) – Islamist militant Mohammed Emwazi, identified as ‘Jihadi John’, was a member of a network in contact with one of the men convicted of trying to bomb the British capital’s underground railway in 2005, according to the government.

The man dubbed by British media “Jihadi John” has fronted Islamic State videos from Syria that showed either the killing or bodies of victims including British, U.S. and Japanese citizens and Syrian soldiers. U.S. security sources last week identified the man, who appeared clad in black and brandishing a knife, as Mohammed Emwazi.

The British government’s view is set out in court papers, reviewed by Reuters and publicly available on the Internet, which refer to 2011 and 2013 British legal hearings concerning two of Emwazi’s London associates, known only as Iranian-born “CE” and Ethiopian-born “J1.”

The court papers reported in the Observer and Sunday Telegraph newspapers, offer a fleeting glimpse of Emwazi’s life in London before he left for Syria.

They show that Emwazi was known to Britain’s security services as early as 2011 and that they believed he was part of a group involved in procuring funds and equipment “for terrorism-related purposes” in Somalia.

They show that authorities thought Emwazi was part of a network that numbered at least 12 people.

One of the same network’s members, “J1”, spoke on the phone with Hussain Osman, one of the men convicted in connection with an unsuccessful attempt to blow up the London underground in 2005, on the day of the failed attack itself, the papers show.

British Islamists killed 52 people in an attack on London’s transport network on July 7, 2005. Another group of Islamists — of which Osman was one — tried and failed to pull off a second attack two weeks later.

Osman, who like “J1” was also born in Ethiopia, was convicted by a London court of conspiracy to murder in 2007 and sentenced to a minimum of 40 years in prison.

The same documents show that “J1”, Emwazi’s associate, was stopped by police in Scotland in 2004 with three others wearing plastic gloves. The men said they were on their way to an area where the authorities said an extremist training camp was being held.

The camp’s organizer, a man identified in court papers only as Hamid, was subsequently convicted of soliciting to murder and of providing terrorism training.

Four of the men involved in the failed London bombings had attended a similar camp organized by Hamid earlier that same year, the court papers said.

The 2011 court papers pertained to a case between the British government and “CE” over the authorities’ decision to relocate him outside London as a preventative measure.

The 2013 papers referred to an immigration appeal case between the British government and “J1.”

The legal documents came to public attention as a political row over the way Britain handles militants broke out with the opposition Labour Party accusing Prime Minister David Cameron’s government of “tying the hands” of security services with insufficiently robust legislation.

Separately, a dispute flared between Cameron’s Conservatives and the Liberal Democrats — their junior coalition partners — over what guidance should be given to universities to prevent militant preachers spreading their message.

The Liberal Democrats said they wanted to ensure that only people known to be inciting violence, rather than advocating Islamic caliphates, were prevented from debating.