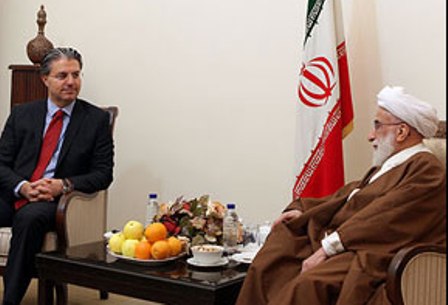 Tehran, March 2, IRNA – Secretary of Guardian Council Ayatollah Ahmad Jannati said on Monday that the Islamic Republic of Iran prohibits proliferation and use of nuclear weapons.

Ayatollah Jannati made the remarks in a meeting with Turkish Ambassador to Tehran Reza Hakan Tekin.

In the meeting, Ayatollah Jannati strongly condemned the dastard conduct of western governments about Iran’s scientific and nuclear advancements.

The Islamic Republic of Iran has become a regional power and strongly resisted to the enemies, he said.

Iran is the only country which passes legislation based on Islamic teachings under supervision of Guardian Council, he said.

Islamic awakening has been in rise the Muslim World mainly in the region as well as north of African continent, he said.

Unfortunately, the Americans were frightened from Islamic awakening and tried to deviate path of revolutions of Egypt and countries in North Africa, Ayatollah Jannati said.

Islam is the religion of peace and brotherhood, he said, condemning those sparing no efforts to depict a rough and violent image of Islam.

Turkish ambassador to Iran called for expansion of all-out relations and cooperation between the two countries.

Turkey is ready to broaden cooperation with Iran in all fields, said Turkish ambassador.