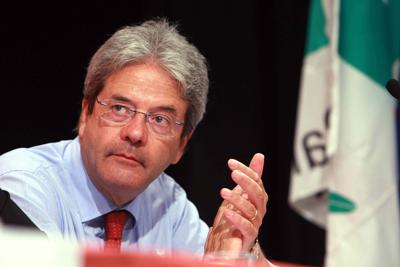 Gentiloni who arrived in Tehran Friday evening on an official invitation by his Iranian counterpart Mohammad Javad Zarif will meet a number of high ranking Iranian officials during his two day visit.

Exchange of views on security, political and economic issues between Iran and Italy and surveying ways of improving bilateral cooperation are on the agenda of Shamkhani-Gentiloni talks.

Foreign Minister Gentiloni has always announced Rome’s readiness for expansion of ties and cooperation with Tehran.

Zarif’s official invitation of his Italian counterpart was made during a phone talk conversation with him last month.

Italy was the first EU country to send a deputy foreign minister on a mission to Tehran after President Rouhani’s victory in presidential elections in Iran.

The Italian foreign minister had in mid-December emphasized the great significance of the Iran-Sextet nuclear negotiations and expressed optimism that in the year 2015 better results would be achieved.