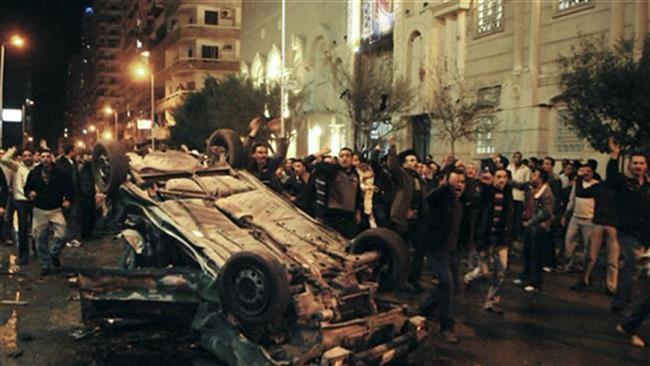 People gather at the site of a bomb attack in Alexandria, Egypt. (File photo)

Cairo (AFP) – One person was killed in a bomb explosion outside a pizzeria in the Egyptian capital Thursday, after three other blasts hit offices of cell phone companies, a health official said.

The bomb tore off the legs of the victim who was pronounced dead in hospital, health ministry spokesman Hossam Abdel Ghaffar told AFP. Two other people were wounded.

Bombs also went off outside two offices of British firm Vodafone and a branch of United Arab Emirates-owned Etisalat, damaging the store fronts but causing no casualties, an interior ministry spokesman told AFP.

The branches were closed at the time of the explosions.

It was not immediately clear why the cell phone companies and restaurant were targeted, but Abdel Latif said authorities had been on the alert for attacks in the runup to parliamentary elections next month.

Militants have set off dozens of bombs in the capital since the army overthrew Islamist president Mohamed Morsi in July 2013 and cracked down on his supporters, killing hundreds of protesters in street clashes.

Most of the bombs have been rudimentary and caused no casualties.

But several have killed policemen, including two senior officers killed while attempting to defuse bombs planted outside the presidential palace in June last year.

Those bombs, and several others that killed policemen in Cairo, were claimed by the Ajnad Misr militant group.

In the Sinai Peninsula where they are based, militants who have pledged allegiance to the Islamic State group have killed scores of soldiers and policemen since Morsi’s overthrow.

The Islamic State affiliate in Sinai has set up branches in the Nile Delta, targeting police headquarters in Cairo and other cities before police killed and arrested most of their operatives last year.

Jihadists, who have focused their attacks on security forces, were also believed to be planning attacks on the embassies of countries that have backed the former army chief and now President Abdel Fattah al-Sisi, officials have said.

Sisi was elected to office in May 2014 pledging to eradicate the militants, but has had limited success, especially in the Sinai where they are waging an insurgency.

In January, simultaneous car bombings and mortar attacks on security headquarters in the peninsula killed at least 30 people, most of them soldiers.

In October, militants set off a truck bomb at a military checkpoint in the Sinai and then raided it, killing at least 30 soldiers and seizing heavy weapons.

The military has launched an unprecedented campaign in the rugged peninsula that borders Israel and the Gaza Strip, deploying thousands of troops and carrying out repeated helicopter strikes against the militants.