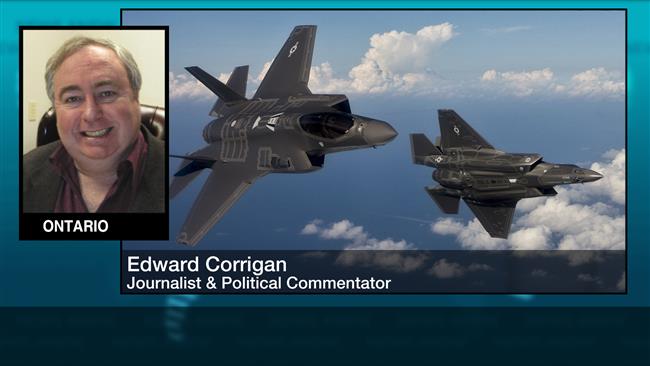 The US provision of stealth fighters to Israel does not serve any defensive purposes, but it enhances Tel Aviv’s abilities to strike countries like Iran, says political commentator Edward Corrigan.

The US is set to arm Israel with more fighter jets in a three-billion-dollar agreement signed between Washington and Tel Aviv over the weekend.

The deal includes 14 F-35 stealth fighters made by the US company, Lockheed Martin, at a cost of about $110 million each, Israeli officials announced on Sunday.

Other technological and training elements were also included in the military package.

“The United States has been Israel’s major supplier for arms and weapons. We just know that stealth fighter really is not a defensive weapon,” Corrigan, an international lawyer, told Press TV on Monday.

He said this is “a dangerous escalation in arms race” and “I don’t think it serves any defensive purposes but enhances Israel’s airstrike capabilities against any of its neighbors” and makes it “possible for Israel to watch an attack on Iran or some other countries.”

The United States provides Israel with some $8.5 million in military aid per day, adding up to over $3 billion annually.

In November, the Department of Defense announced plans to arm Israel with 3,000 smart bombs as part of Washington’s military aid to Tel Aviv.