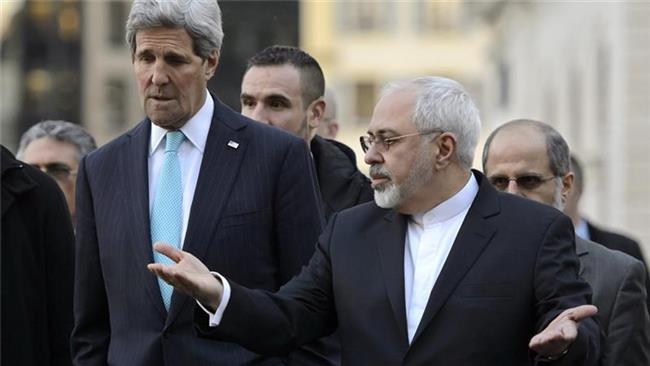 Iran, US end 2nd round of nuclear talks in Geneva

Representatives from Iran and the United States have ended the second round of their latest talks on Tehran’s nuclear program in an attempt to narrow differences ahead of a key July 1 deadline for reaching a comprehensive deal.

Iran’s Foreign Minister Mohammad Javad Zarif and US Secretary of State John Kerry met for three hours at a hotel in the Swiss city of Geneva on Monday after they held 2.5-hour talks on Sunday.

Head of the Atomic Energy Organization of Iran (AEOI) Ali Akbar Salehi and US Energy Secretary Ernest Moniz were also present in the talks.

The meetings between Zarif and Kerry are the latest in a string of talks between the two Iranian and American top diplomats to smooth the way toward a comprehensive nuclear deal.

Technical experts from Iran, the US and Europe also held simultaneous discussions on the Iranian nuclear program.

The ongoing talks in Geneva, which kicked off on Friday, are among the last attempts by the involved parties to narrow gaps on the remaining issues as a July 1 deadline for reaching a comprehensive deal draws closer. The two sides have missed two deadlines since an interim deal was signed in November 2013.

A member of the Iranian negotiating team told IRNA on Monday that there were talks of the continuation of nuclear talks next week, but the exact date has not been determined yet.

Iran and the P5+1 group – Britain, France, China, Russia, and the United States plus Germany – have been holding talks to resolve a dispute over Tehran’s nuclear program.

Iran’s President Hassan Rouhani (shown below) on Monday dismissed as a “big lie” Western allegations that the country has been pursuing a secret nuclear program, saying Tehran has shown the transparency of its peaceful nuclear work to the word.

“We first turned to Europeans to get the [uranium enrichment] technology; If we wanted to conceal [our activities] we wouldn’t raise these issues with a Western country,” Rouhani said.