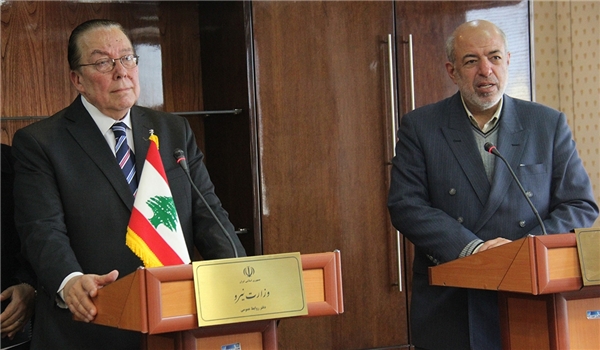 TEHRAN (FNA)- Cooperation between Tehran and Beirut in building dams and preventing pollution of water resources was discussed in a meeting between Iranian Energy Minister Hamid Chitchian and Lebanese Minister of Environment Mohammad Mashnouq.

“During the meeting, some talks were held on issues related to water resources, drought and strategic water-related issues,” Chitchian said after the meeting in Tehran on Sunday.

“In this meeting, we had serious discussions about building dams in Lebanon and water pollution, and Iran’s experiences and capabilities in construction of dams was explained and if Lebanon is willing, we will be ready for the partnership of Iranian companies in building dams,” he added.

Chitchian said Iran is ready to provide Lebanon with all its technical possibilities and capacities.

Mashnouq, for his part, said that he had discussed issues related to cooperation between Iran and Lebanon on water, dams, pollution of water resources and removal of problems.

Fathali said Iran was committed to its promise of contributing in reconstruction of Lebanon under any circumstances.

He further added that following the 33-day war against Lebanon by the Zionist regime, which caused immense destruction, Iran assisted the Lebanese nation in rebuilding schools, mosques, hospitals, bridges and roads.

Iran “is fully ready to play a vital, practical and serious role in support of means of strengthening and developing relations between Iran and Lebanon”, Boroujerdi told reporters after his meeting with Lebanese Prime Minister Tammam Salam.