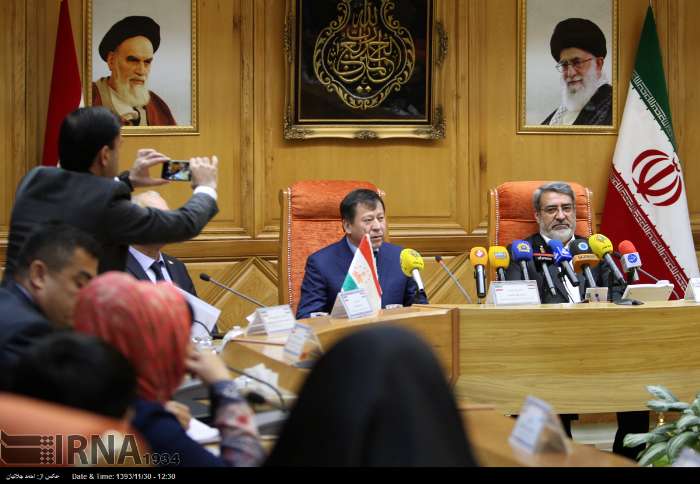 “Terrorism, extremism and human trafficking are [among] the calamitous problems in the region which have emerged through the support the United States, the Israeli regime and some regional countries provide for extremist movements and deviant factions,” Rahmani-Fazli said in a meeting with Tajikistan’s Interior Minister Major General Ramadan Rahimzadeh  in Tehran on Thursday.

The top Iranian official further said the measures taken by the foreign-backed terrorist groups have instigated instability, crises and insecurity in the region.

“Therefore, the [regional] countries’ contribution to fighting terrorism and extremism can help establish lasting security in the region,” Rahmani-Fazli said, adding, “Tajikistan has good cooperation with Iran and other countries in that regard.”

He also touched upon border security between the two countries, saying, cooperation between Tehran and Dushanbe to tighten security along their common borders can bring about positive results for both nations.

He further referred to Iranian President Hassan Rouhani’s trip to Tajikistan in September 2014, saying that during the visit Iran and Tajikistan signed a deal to cooperate in fighting drug smuggling.

Rouhani traveled to Tajikistan on a three-day visit on September 10 to participate in the summit of the Shanghai Cooperation Organization (SCO).

Iran, Tajikistan, Pakistan and Afghanistan can join forces to fight against drug smuggling, added the official.

He also said the two countries have agreed to form a committee to handle the issue of border security and fighting drug smuggling.

The Tajik minister, for his part, said terrorist groups have brought insecurity upon the whole world, adding that Iran and Tajikistan plan to expand their cooperation in fighting terrorism.

He also pointed to the establishment of security in the region, saying that serious measures should be taken to achieve stated objectives in the area of fighting terrorism.

He further noted that Tajikistan plans to expand its cooperation with other countries to counter drug smuggling, expressing hope that cooperation between Tehran, Dushanbe, Kabul and Islamabad can resolve the issue of drug trafficking.

Iran has a 900-kilometer border with Afghanistan, where narcotics production is very high. Smugglers have sought to use Iran as a main route to transfer drugs to Europe.

Over the past three decades, the country has spent millions of dollars to seal the borders and prevent the transit of narcotics destined for European, Arab and Central Asian countries.