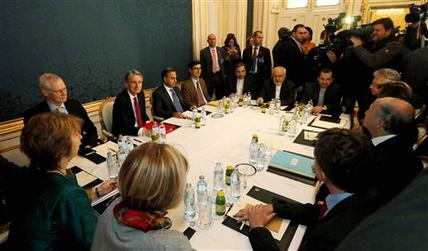 With the March 24 deadline approaching for a political agreement between Iran and the P5+1 (the permanent members of the UN Security Council plus Germany), one aspect of this ongoing political issue is often neglected: the humanitarian dimension.

National, regional, and global security concerns mostly drive the efforts to resolve the nuclear dispute. But the humanitarian consequences for Iran’s population of 78 million people have been severe: socioeconomic hardship, civil rights restrictions, as well as a dire ecological situation.

Domestic economic mismanagement is certainly a root cause of these hardships. And Iranians themselves have to invest a lot of effort to overcome the various shortcomings.

At the same time, however, coercive diplomacy has led to the most comprehensive sanctions regime ever imposed on a sovereign country. These costs, which Iranians have to bear everyday, must be factored into the negotiations.

As I discovered in my trip to Iran last week, Tehranis from all different walks of life currently feel as they are in limbo. No matter the type of hardship, they have long believed that everything would be better once a nuclear deal is achieved, sanctions lifted, and tensions in foreign relations settled. This cautious optimism could be sensed up until a few months ago. Now, however, anxiety has taken over. Everyone is longing for substantial results.

In her op-ed for The New York Times, Ellie Geranmayeh, policy fellow at the European Council on Foreign Affairs, rightfully demands that negotiators better start “making leaps” so that spoilers and ill-wishers on all sides don’t derail a comprehensive nuclear agreement.

This sentiment is echoed in many discussions in Iran. Although people appreciate the small steps taken in the right direction by the negotiators, they long for a final resolution so that they can get on with their lives.

The socioeconomic hardship experienced by Iranians stems largely from banking sanctions. The devaluation of the Iranian currency has led to a critical reduction in general purchasing power in such essential fields as food, housing, electricity, and education. The sanctions have also led to a shortage of medicine. As in the past, a continuation of the international sanctions would hit ordinary people much harder than the ruling elite.

The economic, industrial, and structural restrictions imposed by the international community also have a lot to do with the heavily polluted air in the mega-city of Tehran, for it is caused by low-quality fuel pumped into the atmosphere. Overcoming such ecological problems cannot be resolved entirely by the Iranians themselves. It requires international help, as Iranians officials admit.

The Islamic Republic is experienced in keeping its economy stable against all odds, which has elicitedrepeated praise from the International Monetary Fund. By distributing goods, subsidies, and even cash, the state has effectively prevented popular discontent from escalating into broader protests.

The heightened security situation inside Iran, which stems from the country’s national and regional context, adds to the unpleasant living conditions for many. Hence, the Iranian electorate welcomed President Rouhani’s campaign promises to reduce security restrictions in the public realm. And indeed, since his election, the situation at universities has improved, media diversity has increased, and book authors have indicated substantial improvement.

At the same time, however, the government has shut down some media outlets and arrested journalists and activists. The number of executions has skyrocketed, so much so that Iranian officials themselves have started voicing their discontent and considering new legislation.

The international community can meaningfully help by ending its coercive diplomacy. This external pressure has served as a convenient excuse for Iran’s establishment to impose security restrictions on academia, the political scene, public life, as well as the media and cultural landscapes. These are all areas in which “the enemy”—Western countries, according to the state—is believed to be inciting rebellion and conflict.

A breakthrough in the nuclear negotiations followed by an international opening would help the Rouhani government to improve the civil rights situation and the overall living conditions. Such a foreign policy success would significantly strengthen Rouhani’s position vis-à-vis conservative rivals who prefer more restrictive measures and monitoring on social, political and cultural life. Failure, on the other hand, would leave Supreme Leader Ayatollah Khamenei with no choice but to grant those hard-liners more domestic authority.

Western diplomats involved in the latest round of bilateral talks at the Munich Security Conference have made some promising statements regarding the state of the negotiations. Iranian leaders, too, provided some hopeful signs. For instance, during his recent speech in Isfahan, Parliament Speaker Ali Larijani said that “no Iranian official is against a nuclear deal.”.

But more importantly, in his speech to Air Force commanders on February 8,, the Supreme Leader made clear that he would “consent to an agreement that is workable,” sounding much more pragmatic than in the past. He openly reciprocated the US position that “no deal is better than a bad deal.”

Khamenei also basically green-lighted the concessions Iran has been asked to undertake to achieve an agreement—from the level of enrichment to the number and nature of nuclear facilities and sites. Khamenei emphasized how much had already been achieved in the negotiations. He explained that Iran’s negotiators have “deemed it necessary” to make these concessions, as no side is in a position to achieve “everything that it wants and expects.”

“To Western ears attuned to Khamenei’s chronic skepticism, the remarks were, for the first time, more positive than negative and suggested he was preparing his hard-line political base for a landmark deal with the ‘Great Satan,’” observed Iran-watcher Barbara Slavin in al-Jazeera.

The P5+1, and in particular the United States and the EU3, should abide by their self-proclaimed dedication to the human rights situation in Iran. They should recognize, however, that civil rights extend to food, clean air and water, education, and economic justice.

The international community should help the Rouhani administration tackle these challenges by doing its part to resolve a diplomatic crisis that has prevented any meaningful partnership or cooperation with Iran.

The Iranian side, often concerned with questions of prestige and inalienable rights, should acknowledge that a lot of that very prestige has already been restored in Western discourse. Iran is seen increasingly as a partner in Iraq (and even Syria). The “no enrichment” notion is effectively off the table as is any “regime change” policy, including the infamous “military option.”

Knowing all too well that the other side also wants a deal seems to make it more difficult for the negotiators to reach a conclusion. Prolonging the negotiations may well be frustrating to the negotiators. But it has a much greater negative effect on all those who not only want but urgently needan agreement, namely the millions of Iranians who bear the brunt of the humanitarian problems in their country.

This article was written by Adnan Tabatabai for Lobe Log. Adnan Tabatabai is co-founder and CEO of the Center for Applied Research in Partnership with the Orient (CARPO).