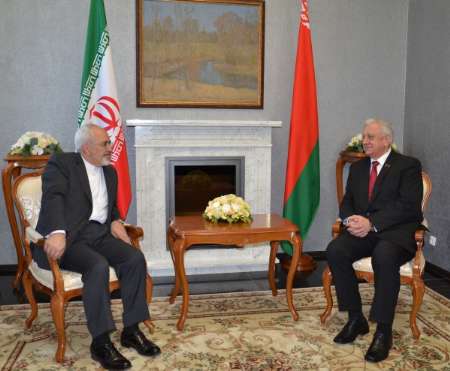 Speaker of the Upper House of Belarus Council of the Republic at the National Assembly Mikhail Myasnikovich meets Iran’s FM Zarif in Minsk on February 17, 2015.

Speaker of the Upper House of Belarus Council of the Republic at the National Assembly Mikhail Myasnikovich made the remarks in a meeting with the visiting Iranian Foreign Minister Mohammad Javad Zarif.

Zarif is currently in Belarus on a two-day visit.

IRNA learned that Zarif is scheduled to participate in opening ceremony of Iran’s new Embassy building in Minsk.

The Iranian and Belarusian officials discussed a variety of issues of mutual interests in the meeting including promotion of parliamentary cooperation between the two countries.

Referring to the last April’s visit to Belarus of the Iranian Majlis Speaker Ali Larijani, Myasnikovich said the visit played a major role in boosting bilateral relations of the two countries.

The Belarusian official stressed the need for upgrading Tehran-Minsk economic ties in accordance to the good level of their political relations.

Prior to his meeting with the speaker of Belarus upper House, Zarif met with Prime Minister of that country Andrei Kobyakov as well as its President Alexander Lukashenko and his counterpart Vladimir Makei.