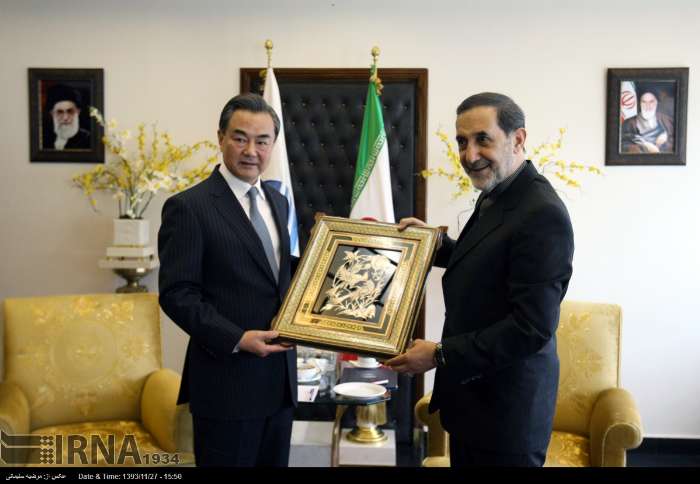 He made the remarks on the sidelines of his meeting with visiting Chinese Foreign Minister Wang Yi.

‘Our nuclear negotiators move in line with the directives of the Supreme Leader of the Islamic revolution,’ Velayati said.

The Iranian nuclear negotiators are obliged to move in line with a defined framework and one of the main principles call for simultaneous conduct of nuclear talks in general and detailed terms, he said.

General and detailed issues should be proceeded in parallel, Velayati said.

Referring to the peace negotiations between Palestinians and Zionist regime in 2104, he said separation of general and detailed terms in talks is regarded as a colonial trick pursued by Americans and Zionists.

He said that the western governments are exploiting the timeframe envisaged to set the general terms and the details afterward as procrastination and bargaining chip.

He said that the Oslo and Camp David accords are good examples of the western governments procrastination.

Such historical examples indicate that separation of general and detailed terms in talks is not advisable, he said.

On reimposing sanctions on Iranian oil tankers by European Union after the European Court of Justice revoked the sanctions on the oil tankers citing lack of substantive evidences, he said Iran was under tough economic sanctions from early stages of the Islamic revolution.

‘We have learned how to overcome economic sanctions and the country under no circumstances will change its stand or give up legitimate rights,’ he said.

In the meeting, the two sides also discussed Iran’s nuclear program, he said.

Chinese foreign minister believes in Iran’s peaceful nuclear program and the fact that the Islamic Republic of Iran has no plan to proliferate nuclear weapons, he said.

After the meeting, the Chinese foreign minister told reporters that current level of relations between the two countries is satisfactory, Velayati said.

The two sides should do their best to achieve the dlrs 200 billion target set for annual trade, he said.