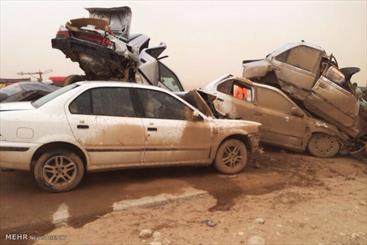 AHVAZ, Feb. 15 (MNA) – The head of traffic police of Khuzestan Province has said during recent days thick dusty air has been the major cause of several chain road accidents in the province.

Col. Adel Majdami told reporters on Saturday in Ahvaz that dust storm had reduced the visibility of drivers of vehicles, which “has brought about several chain accidents in roads;” however, “fortunately, no damage in terms of human life has been reported,” he told reporters.

“During dusty days in the province about 60 road accidents have been reported; no significant difference has been detected in the number of accidents, but the manner in which accidents actually happen and the intensity of the impact among vehicles has shown major differences compared to days with clean air,” said Col. Majdami, “however, in two severe accidents, driver of a motorbike has been killed and his company has been severely injured,” he added.

Col. Majdami called all drivers driving in motorways of the province to exercise more care when driving in dusty weather to prvent damage on themselves and others.