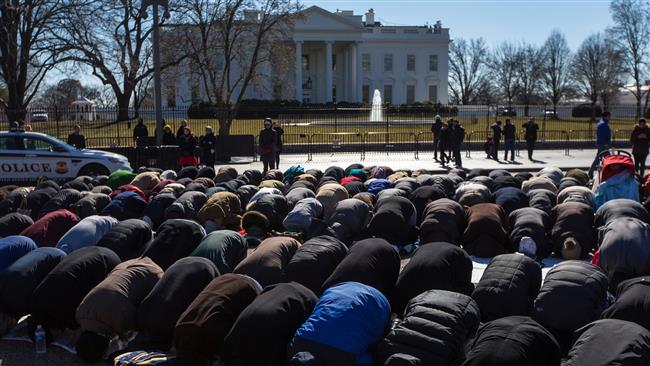 Protesters gathered to pray outside the White House on Friday in response to the killing of three Muslim students in North Carolina on Tuesday.

A large number of people have held a demonstration outside the White House in Washington, DC to condemn the recent killings of three Muslim students in North Carolina, calling for the deadly incident to be treated as a hate crime, Press TV reports.

Protesters came from across the Washington, DC metro area to pray and raise awareness about ethnic and religious tolerance in the United States, Press TV correspondent Colin Campbell reported on Friday.

Rakiv Mazumder, a participant, told Press TV that he heard about the shootings through social media. “I am here to pray with my fellow Muslims and to honor the three students that tragically died.”

Local police have launched a homicide investigation focusing on a dispute over a parking space, but the families of the victims have rejected that narrative, describing the killing an “execution-style murder” and a “hate crime”.

Families of the three, who were shot in the head by Craig Stephen Hicks, 46, said they were executed for their religion, Islam, rather than being simply targeted by a criminal.

The killings of three young Muslims, called “gems of their communities”, have caused outrage among Muslims all over the world. Many claim the crimes would have gained more attention if the attacker had been a Muslim and the victims were non-Muslim whites.

Since the murders US media and law enforcement have been criticized for not treating the shootings as a hate crime. A hate crime indictment would carry a more severe penalty for the murders.

Nigah Mughal told Press TV that she has received Islamophobic comments she usually ignores. But when an individual crosses the line, she said justice should be served.

“After this incident, I think, you know always there is something in the back of your head, ‘I could be targeted.’”

The FBI has launched its own probe into the killing of the three students. Representatives from the Council on American-Islamic Relations, a Muslim advocacy group, welcomed the FBI announcement.

More than 100 religious and community groups including predominantly Muslim groups have on the Obama administration to open a hate crime inquiry and publicly denounce the shootings. The letter is signed by the groups and is addressed to Eric Holder, the US attorney general.