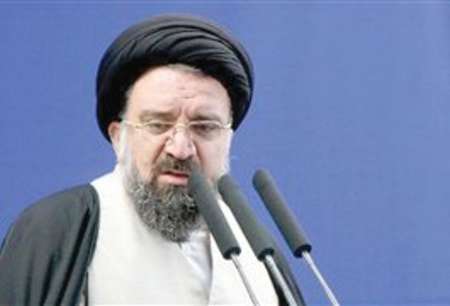 Iran daily: Tehran friday prayer — “US trying to deceive us in nuclear talks”

Delivering the Tehran Friday Prayer, hardline cleric Ahmad Khatami took a tough line on the ongoing nuclear talks: “The 5+1 Powers, especially the US, intended to deceive the Iranian team of negotiators by trying to clinch a two-phased agreement instead of a single-phased deal.”

Ayatollah Khatami’s address reinforced Sunday’s denunciation by the Supreme Leader of a US proposal for an agreement on General Principles by late March, followed by a comprehensive settlement by a July 1 deadline.

Iran is insisting on a full and final resolution, including the lifting of sanctions on its oil and banking sectors within six months. The US is saying that the process could take “years”, even if the Islamic Republic meets demands to restrict its centrifuges for uranium enrichment.

Khatami made no reference to the Supreme Leader’s indication on Sunday that Iran was ready to conclude a compromise agreement, if this was done now and with a commitment to the quick easing of sanctions. Instead, he repeated the mantra that “no deal is better than a bad deal” and declared, “We thank God for having such a wise leader who foiled the enemies’ plots.”

Iran and the 5+1 Powers (US, Britain, France, Germany, China, and Russia) have failed to close gaps despite a series of high-level talks over the past month. Washington is indicating that Iranian concessions are needed quickly before the US Congress presses for further sanctions and an effective sidelining of any possible agreement.

An “Iranian diplomat” has said that the Supreme Leader sent a letter to Barack Obama in recent weeks, replying to an October message from the US President.

The diplomat said Khamenei had responded to Obama’s discussion of possible US-Iran cooperation against the Islamic State in the region, provided a nuclear deal is secured. He gave no details beyond saying the letter was “respectful” but noncommittal.

A senior White House official declined to confirm that Khamenei’s response had been received.

Obama and Khamenei also exchanged letters in 2009, as the US President sought engagement with Tehran, but the correspondence was blunted by mass protests after Iran’s disputed Presidential election in June.