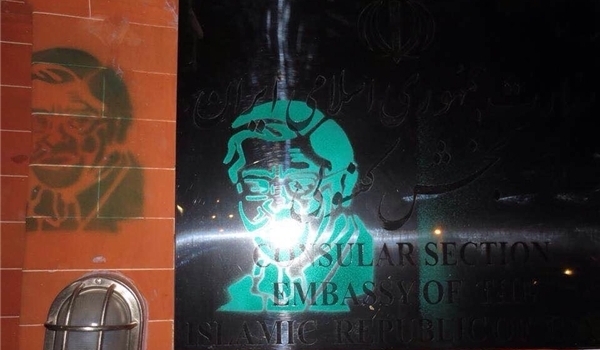 TEHRAN (FNA)- A number of anti-revolutionaries staged a sabotage attack on the Iranian embassy in London.

The attack took place against the consular part of the Iranian embassy in London on Friday, two days after millions of Iranian people in the country and other parts of the world took to the streets on February 11 (the anniversary of the victory of the Islamic Revolution in Iran in 1979) to show strong support for the Islamic Revolution’s ideals and causes.

The Iranian and British foreign ministries have not yet shown any reaction to the incident.

Then in a meeting at the UN Headquarters in New York City on September 23, 2013 Iranian Foreign Minister Mohammad Javad Zarif and his British counterpart discussed improvement of Tehran-London relations among their other discussions over Iran’s nuclear energy program as well as regional developments.

Following a set of talks between the two sides, Tehran and London eventually agreed to resume diplomatic relations and announced the names of their non-resident charges d’affaires in October 2013 who are now permanent diplomats.

The two countries now have resident charges d’affaires in each other’s capitals.

Some sources said London has asked for Iran’s compensation for the attack on its embassy in 2011, and it should now be seen if Iran would reciprocate the demand and ask for the same.