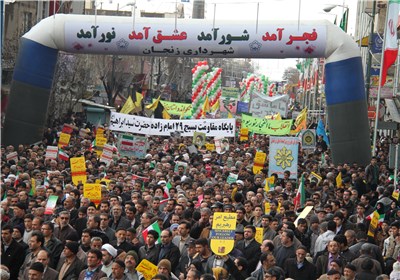 “The glorious and powerful presence” of Iran’s great people in the nationwide rallies once again demonstrated that “the freedom seeking” people are always committed to the Islamic Revolution’s causes and ideals, the organization said in a statement on Thursday.

Millions of Iranian people from every walk of life, carrying flags and banners in support of the Islamic Republic, took to streets on Wednesday in nationwide mass rallies.

More than 1,000 cities and over 5,000 villages across Iran saw demonstration for the national celebration.

The huge crowd of demonstrators in the rallies also paid tribute to the late founder of the Islamic Republic, Imam Khomeini, under whose leadership the revolutionary movements triumphed over the despotic regime of Pahlavi on February 11, 1979.

The Iranian nation toppled the US-backed Pahlavi regime 36 years ago, on February 11, 1979, ending the 2,500 years of monarchic rule in the country.

The Revolution, led by the late Imam Khomeini, established a new political system based on Islamic values and democracy.