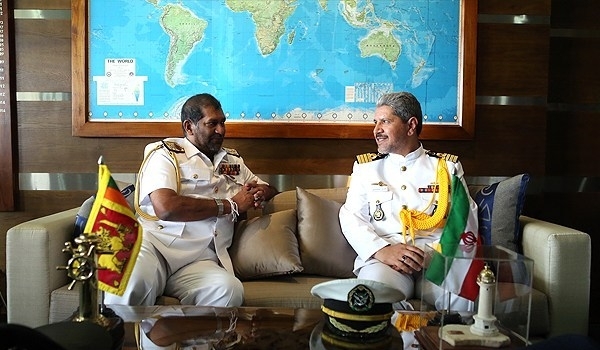 “We are ready to accept (naval) students from Sri Lanka and other friendly and brotherly countries,” Commodore Ahmadi Kermanshahi said in a meeting with Sri Lankan Navy Commander Vice Admiral Jayantha Perera in the port city of Colombo on Tuesday.

He noted that the Iranian Navy is also ready for exchanging information and expertise with the Sri Lankan Navy.

Commodore Ahmadi Kermanshahi noted that after the victory of the Islamic Revolution in 1979, the Iranian Armed Forces, specially the country’s Navy, have acted independently in training personnel and the entire Navy personnel are currently being trained in Iran.

“We are self-sufficient in designing, building, maintaining and repairing military equipment, including heavy vessels and even submarines, and are no way reliant on the outside world,” he said.

The Iranian flotilla has several missions, including cadet training, and Commodore Ahmadi Kermanshahi said on Monday that the Navy cadets are undergoing practical training during the several-thousand-kilometer-long voyage.

The Iranian Navy’s 33rd flotilla of warships,, was welcomed at Colombo port by the Iranian embassy officials and Sri Lankan navy commanders yesterday.

The Iranian Navy’s 24th and 28th fleet of warships had also earlier docked in Sri Lanka.

The 33rd fleet of warships left Bandar Abbas port in Southern Iran for the Gulf of Aden late last month to protect the country’s cargo ships and oil tankers against pirates.