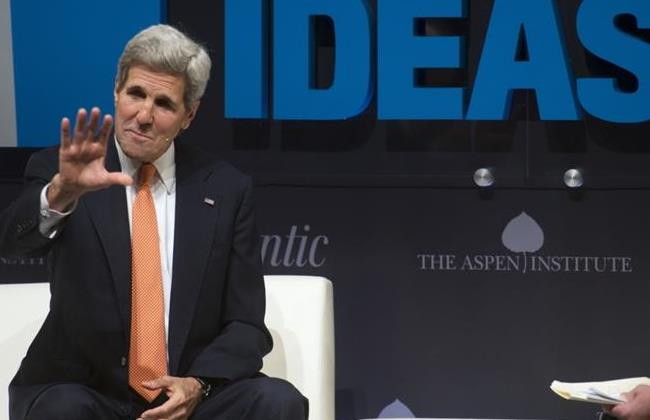 MUNICH — Secretary of State John F. Kerry said in an interview broadcast Sunday that it would be “impossible” to extend nuclear negotiations with Iran if an agreement on fundamental principles is not reached in the coming weeks.

Using more categorical language than he has employed previously, Kerry definitively precluded a third extension to talks with Iran about reducing its ability to make a nuclear bomb or easing sanctions.

In November, when no deal could be struck by a self-imposed deadline, a temporary agreement, which had been in place for a year and had been extended once before, was pushed to late June. Kerry said at the time that the major points of agreement would have to be reached by late March. In an interview with NBC’s “Meet the Press,” taped Saturday in Munich where he was attending an international security conference, Kerry appeared to close the door on another extension.

“Well, the only chance I can see of an extension at this point in time would be that you really have the outlines of the agreement,” he said, according to a transcript of the interview. “You understand exactly what you’re doing.”

One reason for an extension, Kerry added, would be to flesh out complex details spelled out in numerous footnotes known as “annexes.”

“But if we’re not able to make the fundamental decisions that have to be made over the course of the next weeks, literally, I think it would be impossible to extend,” he said. “I don’t think we would want to extend at that point. Either you make the decisions to prove your program is a peaceful one, or if you’re unable to do that, it may tell a story that none of us want to hear.”

The nuclear talks, which began a decade ago with Iran and were revived after Hassan Rouhani, a moderate, was elected president in 2013, have been the subject of much concern. Israeli President Benjamin Netanyahu, who has reached out to the foreign ministers of the five other countries that are negotiating partners of the United States to lobby against a deal, is expected to be highly critical of any potential agreement in an address to Congress planned for March 3.

Israel and the Persian Gulf countries are worried that Iran is on the threshold of developing nuclear weapons. If that were to happen, it could set off a nuclear arms race in the region.

Kerry has met several times in recent weeks with Iranian Foreign Minister Mohammad Javad Zarif, including twice this weekend in Munich. State Department officials have released almost no details of the complex talks, beyond saying that they are making progress but that large gaps remain.

In Washington, lawmakers in Congress are considering imposing new sanctions on Tehran as leverage to force Iranian concessions, particularly on the number of uranium-enriching centrifuges that Iran says it maintains for peaceful purposes such as energy production and medical testing. The White House has urged patience, saying that more sanctions could lead the Iranians to abandon talks and a temporary accord that has limited Iran’s enrichment program while negotiations for a permanent deal continue.

Hard-liners in Iran who oppose any deal involving the United States also are working to undermine the negotiations.

For now, domestic opposition in Tehran and Washington serves as pressure to reach a final deal.

“We need to seize this opportunity,” Zarif said Sunday in a forum at the Munich conference. “It may not be repeated.”

President Obama and Kerry have said repeatedly that they will not agree to any deal with Iran that would allow Tehran to quickly convert its peaceful nuclear stockpiles to a bomb-making operation.