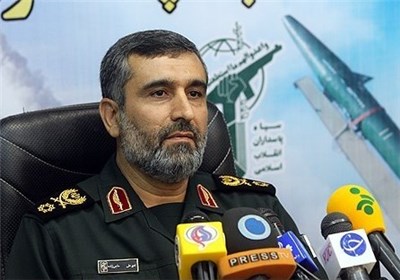 “Our forefront today is reaching self-sufficiency” in every field, Hajizadeh said, addressing a forum at Sharif University of Technology in Tehran on Monday, and added, “The efficiency of the Iranian RQ-170 is no less than the US model.”

Meantime, he underlined that Iran does not produce copy cat models of western products, but it uses them in its own models depending on the type of mission needed.

“The IRGC has never acted only based on the western patterns and models to build and use equipment, but it designs and builds tools and equipment proportionate to the threats, needs and missions given to it,” he stated.

Hajizadeh reminded that Iran had acquired the drone building technology long before hunting the US model of RQ-170 in 2011 and reverse engineering it.

In relevant remarks in November, Hajizadeh announced that the Iranian version of the RQ-170 drone with the capability of conducting bombing and reconnaissance missions had its first flight after tests.

“We had promised to fly the final model of RQ-170 in the second half of the current (Iranian) year (which started on March 21) and this has happened and the footage of its flight will be released soon,” Hajizadeh told reporters in Tehran.

Elaborating on the Iranian version of the RQ-170 drone which has been manufactured through the reverse engineering of the US drone which was tracked and hunted down in Iran late in 2011 and has been equipped by the IRGC with bombing capability, Hajizadeh had informed in September that “the prototype model of this drone (which was 60% smaller than the original drone in size) flew about three months ago and God willing, the final model of the plane will fly this year”.

He said that the Americans themselves had also thought of providing the drone with bombing capability and foreseen some special parts for mounting bombs on the aircraft. Yet, they used it for reconnaissance and spying operations, he said.

“But we will use it for both missions,” continued the General.

Some days after Hajizadeh’s remarks, Iran released a footage of its RQ-170 drone’s flight after tests.

Also in his September remarks, Hajizadeh referred to the downing of the US RQ-170 drone in 2011, and said more important than using its technology had been the “disclosure of the Americans’ most advanced capabilities and weak points to us”.