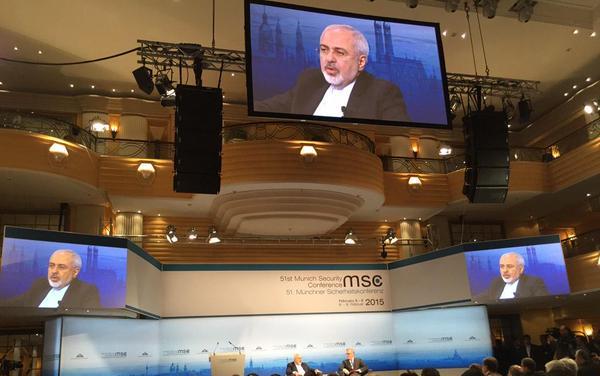 MUNICH — Iran’s foreign minister, Mohammad Javad Zarif, said Sunday that Tehran did not favor another extension of the talks on limiting its nuclear program and expected economic sanctions to be quickly lifted if an accord was reached.

“Sanctions are a liability; you need to get rid of them if you want a solution,” Mr. Zarif told a security conference in Munich. “This is the opportunity to do it, and we need to seize this opportunity,” he said of the long effort to forge an agreement. “It may not be repeated.”

The nuclear talks have already been extended twice and face a late March deadline for working out the main outlines of an accord. The deadline for a detailed agreement is the end of June.

With a Republican-led Congress in Washington, an extension of the talks is virtually a political impossibility for the United States. And Secretary of State John Kerry, who met twice here with Mr. Zarif, including 90 minutes early Sunday morning, has been making an intensive effort to negotiate an accord.

Mr. Zarif spoke as Iran’s supreme leader, Ayatollah Ali Khamenei, said Sunday that he was willing to accept an agreement that did not undermine his nation’s interests, an important gesture of support to Mr. Zarif and President Hassan Rouhani.

“I would go along with the agreement in the making,” Ayatollah Khamenei said in a speech, according to IRNA, Iran’s official news agency. “Our negotiators are trying to take the weapon of sanctions away from the enemy. If they can, so much the better. If they fail, everyone should know there are many ways at our disposal to dull this weapon.”

Mr. Zarif was speaking at the Munich Security Conference, which was dominated by debates over Ukraine as diplomats discussed a possible new cease-fire arrangement with Russia and Ukraine.

Mr. Kerry and the German and French foreign ministers were trying to see if a new arrangement could be negotiated to end the fighting in eastern Ukraine without conceding too much autonomy to areas occupied by Ukrainian separatists and Russian soldiers.

On Sunday, Germany announced that the leaders of Russia, Ukraine, Germany and France aimed to meet in Minsk on Wednesday to continue work on resolving the Ukraine crisis. Diplomats will gather in Berlin on Tuesday to try to arrange the meeting, the German government spokesman, Steffen Seibert, said in a statement.

Speaking in Sochi during a meeting with the leader of Belarus, President Vladimir V. Putin of Russia said that a Wednesday meeting would require agreement on key points beforehand. “We will be aiming for Wednesday, if by that time we are able to agree on a number of points that we’ve recently been discussing intensely,” he said.

At the conference, sharp splits emerged between Germany and prominent American politicians like Senator John McCain over the wisdom of supplying defensive arms to Ukraine. Moscow continues to deny the involvement of its military. But one of the main prompts for Germany and France to try to work out a new arrangement in eastern Ukraine has been a serious discussion in Washington about providing lethal, if defensive, military equipment to Kiev, something that both the German and French leaders have opposed.

In a speech on Sunday, Mr. McCain said the European opposition missed the connection between military pressure and successful diplomacy. “If we help Ukrainians increase the military cost to the Russian forces that have invaded their country, how long can Putin sustain a war that he tells his people is not happening?” he said. “That is why we must provide defensive arms to Ukraine.”

He said that in his view, Mr. Putin did not want a diplomatic solution, but “he wants to dominate Ukraine” as a “prelude to further aggression.”

The German foreign minister, Frank-Walter Steinmeier, brushed away the criticism. Negotiations for a peaceful solution are vital, he said. “We must make sure we use this opportunity to contain and then defuse these conflicts,” he said. “It would be irresponsible not to use the opportunities we have.”

Laurent Fabius, the French foreign minister, said that if the Russian goal was special status and a form of political autonomy for the east within a constitutional, sovereign Ukraine, that could be acceptable. “But if the real objective is different, to have a grasp on Ukraine or at least on eastern Ukraine and Ukrainian foreign policy,” he said, then that would be unacceptable for Europe.

On Iran, Mr. Kerry has publicly outlined an ambitious goal for what an agreement should achieve: It should slow Iran’s nuclear program enough so that it would take Tehran at least a year to produce enough material for a nuclear bomb if it later decided to “break out” of the accord. Any agreement that fell short of that standard would face sharp criticism in Congress, where many lawmakers have vowed to vote for additional sanctions if the talks fail.

Mr. Zarif insisted in October that Iran was opposed to prolonging the talks before they were last extended in November. And it remains to be seen if Iran will make the compromises that would be needed to seal an agreement. “I do not believe another extension is in the interests of anybody, as I did not believe this extension was either necessary or useful,” he said Sunday.

Mr. Zarif was not pressed hard on the details of Iran’s position or its activities elsewhere in the Middle East, and he used his appearance here to present Iran as peace-minded and victimized by Western and Israeli anxiety, which he insisted was unfounded, about Iran’s military, nuclear and regional aims.

Western negotiators with Iran on the nuclear issue believe that a satisfactory technical agreement is possible, but they are increasingly concerned about the hostility to a deal from politicians in both Iran and the United States, with Congress aware of Israeli opposition and discussing further sanctions on Iran.

But Ray Takeyh, an expert at the Council on Foreign Relations, said that Ayatollah Khamenei’s comments suggested he might have unrealistic expectations on how fast sanctions would be lifted. The United States and its partners have favored a phased approach in which sanctions would be removed as Iran took steps to carry out the accord over a period of years.

In his appearance here, Mr. Zarif also said that Iran was prepared to engage diplomatically with Saudi Arabia, Turkey and other states to pursue a diplomatic solution for the conflict of Syria.

Iran has provided arms and sent paramilitary Quds Force fighters to help President Bashar al-Assad of Syria in the battle against Syrian rebels. Saudi Arabia and other Arab states that oppose Mr. Assad’s rule have insisted that Iran should not have a role in any regional talks on the Syria crisis.