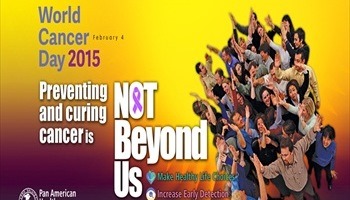 Preventing and curing cancer is not beyond us.

World Cancer Day is commemorated on 4 February every year.

The international community is capable of coming together to tackle cancer which is taking its toll in developing countries.

That’s the message on World Cancer Day, which is observed on 4 February each year to put a spotlight on the disease.

According to the World Health Organization (WHO) annually, there are 14 million new cases of cancer. Over eight million people die from cancer, with 70 per cent of them being in developing countries.

WHO says that there are powerful global trends that contribute to the rise of cancer in the developing world, including population ageing, rapid unplanned urbanization, and the globalization of unhealthy lifestyles. It warns that unless action is taken, deaths from cancer in developing countries are forecast to grow to 7.6 million this year and close to 9 million in 2030. The agency says World Cancer Day offers an opportunity to demonstrate its policies and programmes for countries to reduce their cancer burden.

The theme for this year’s World Cancer Day is “Not beyond us”.