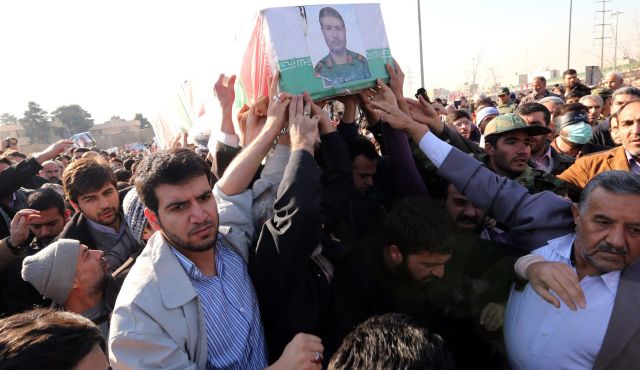 Iran: Israel asked us not to escalate conflict

Iranian mourners carry the coffin of Brigadier General Mohammad Ali Allahdadi, who was killed in an alleged Israeli airstrike in Syria, during his funeral procession in Tehran, January 21, 2015. Photo by AFP

Statement by high-ranking Iranian confirms that Israel was behind Quneitra attack and that the two enemies have an official channel of communication.

Israel conveyed a direct message to Iran asking that Tehran not take action that would lead to an escalation, in the wake of the killing of an Iranian general and several Hezbollah operatives in the January 18 bombing in the Syrian town of Quneitra , widely attributed to Israel.

Ala al-Din Boroujerdi, chairman of Iran’s national security and foreign policy parliamentary committee, reported that Iran had received a message via an “official channel” stating that Israel had no desire for “this problem to continue and cause an escalation, and that Israel expected that the other side would behave similarly as well.” Boroujerdi said explicitly that this message arrived at the Iranian Foreign Ministry. He added: “The Zionists already have experience in five wars, and I think that is enough for them…. I do not think that the Zionist entity wants a comprehensive war because such a decision will cause a repeat of their previous defeats.”

Boroujerdi said that Hezbollah’s attack on an Israeli patrol — in which two Israel Defense Forces soldiers were killed on Har Dov, in the disputed Shebaa Farms area near the Lebanese border — was a response by Hezbollah, not an operation. In other words, it was a case of “Shebaa for Quneitra,” he said, adding that Hezbollah’s action had been carried out from inside Lebanese territory, and that according to international law, every country has the right to self-defense.

“From now on, the resistance will respond to any strike at Hezbollah personnel by the terrorist Zionist entity, and it is certain that the response will not necessarily take place at the scene of the crime; we will determine the appropriate place and time. “After the killing of the high-ranking officer in the Revolutionary Guard [who was killed in the attack in Quneitra],” Boroujerdi added, “Iran’s account with Israel remains open, but this does not mean that Iran’s policy is to begin a war in the region.”

If Boroujerdi’s statements are accurate, this is confirmation not only that Israel was behind the attack in Quneitra, but also that there are official channels of communication between Israel and Iran.