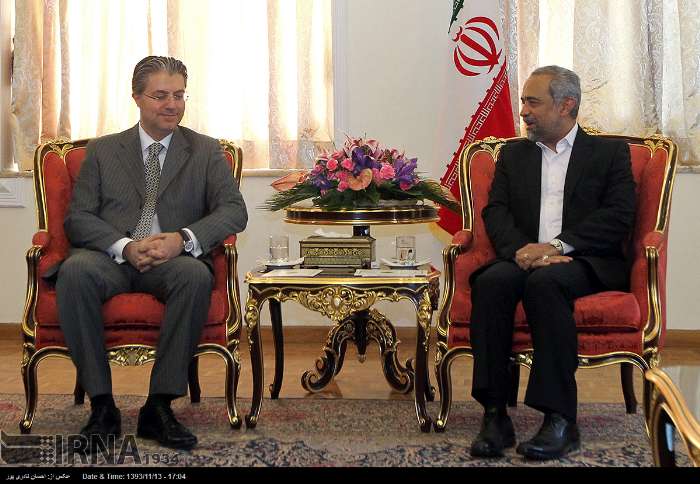 Tehran, Feb 2, IRNA – Chief of Staff of Presidential Office by expressing satisfaction of political ties level between Tehran and Ankara and efforts of new Turkish ambassador to Tehran to expand economic relations said that expansion and consolidation of economic relations between Iran and Turkey will guarantee deepening and continuation of political and cultural ties.

Mohammad Nahavandian in a meeting with Turkish Ambassador to Tehran Hakan Tekin referred to implementation of preferential trade agreement between the two countries and said that Iran economy should be competitive to progress and in this concern private sectors of the two countries should feel balanced benefits.

He said that Iran is pleased with implementation of preferential trade agreement between Iran and Turkey adding that of course it needs removal of number of existing obstacles in the way of export of some items from Iran to Turkey.

Nahavandian said that mutual visits between officials of the two countries will facilitate and accelerate expansion of trade.

He said that President Rouhani underlined especially development of transport between the two countries in the field of railway and land roads.

Iran is interested in transport cooperation with Turkey and countries in the east of Iran to link to Europe through Turkey, Nahavandian said that in case of expansion of roads and railways connections between Iran and Turkey ports, the route could be substitute for transit route from south of Iran.

The friendly relations between Tehran and Ankara would play an important role in settling problems in the region, especially in current situation both countries are facing common dangers.

Tekin, for his part, by referring to historical and deep cultural ties between Iran and Turkey, expressed hope that during his tenure in Tehran he would consolidate economic ties between the two countries.

He said that quality of preferential trade agreement between Iran and Turkey is very rare and Turkey intends to establish free trade zones between the two nations.