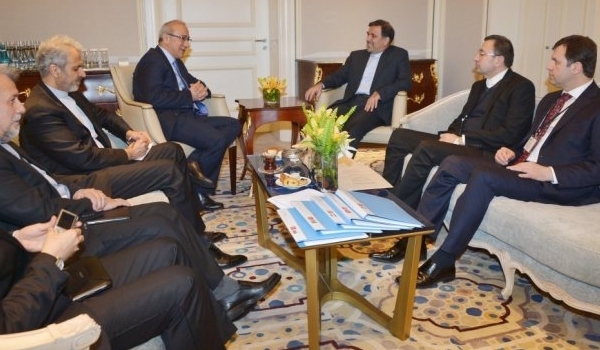 TEHRAN (FNA)- Iranian Minister of Road and Urbanization Abbas Akhoundi and his Turkish counterpart Lutfi Elvan in a series of meetings in Istanbul explored avenues for bolstering and reinvigorating mutual cooperation in the transportation sector.

“The Iranian and Turkish road ministers met three times on the sidelines of the Transport Corridor for Europe-Caucasus-Asia (TRACECA) meeting in Istanbul and discussed cooperation in the transport sector,” Iranian Ambassador to Ankara Alireza Bigdeli wrote on his facebook page.

Bigdeli noted that the Iranian and Turkish road ministers agreed on broadening bilateral ties in the road, rail and air transportation sectors in their meetings.

TRACECA, or the Transport Corridor for Europe-Caucasus-Asia, is an international transport program involving the European Union and 13 other European and Asian countries, including Iran and Turkey.

Although TRACECA can trace its roots back to 1993, it officially came into existence with the “Baku Initiative” of 2004. The project aims to boost transport cooperation and network integration between the EU and the Black Sea and Caspian Sea coastal states and their neighbors. This in turn should encourage the further development of economic and trade relations.

The aim of the meeting of TRACECA in Istanbul was to put the East-West Transport corridor firmly back on track, specially after last month’s deal between China and Russia which seemed to kill off TRACECA’s own alternative “Silk Wind” freight train Project.