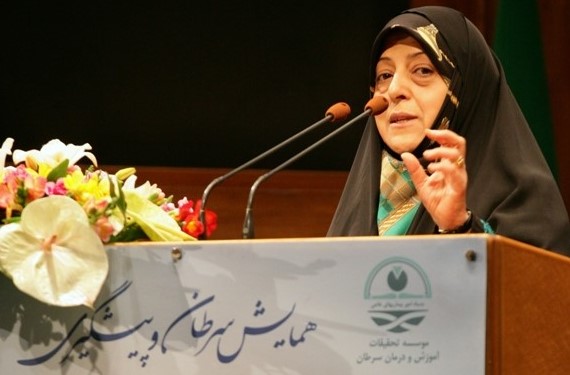 Changes in social policy can help to fight cancer

On 26th January, Vice-President Madam Ebtekar, senior government officials and distinguished medical professionals and the United Nations Resident Coordinator, met to discuss solutions to battling cancer and other non-communicable diseases.  The occasion was the Cancer and Prevention Conference held in the IRIB International Centre here in Tehran.

The conference participants were trying to find solutions to the growing problem of cancer fatalities in Iran.  “Cancer is the third largest cause of death in Iran,” said renowned oncologist, Professor Farhad Samiee.  “Iran has made major achievements in cancer control and treatment,” he continued, “but scientific capacities are not enough.  We need to start changing our lifestyles.”

The UN Resident Coordinator in the I.R.Iran, Mr. Gary Lewis: “The United Nations in Iran stands ready to assist in finding solutions to non-communicable diseases and – of course – cancer.”

Mr. Gary Lewis, the UN Resident Coordinator in Iran, agreed with this sentiment and in his address discussed the changing nature of the global public health landscape.

“We must not overlook the importance of the bio-medical approach to health,” Mr. Lewis said, “but we can make major improvements in health by taking coordinated action outside the health sector.” Citing non-communicable diseases such as heart disease, diabetes, chronic lung disease, stroke and cancer being influenced by life-style choices such as smoking, an unhealthy diet, lack of exercise, excessive alcohol consumption and opium use, the Resident Coordinator invited the audience to consider the social determinants of health.

“Social inequality matters,” Mr. Lewis said, “when we consider that the social determinants which shape the conditions in which people are born, grow, live work and age are the root cause of the bulk of the global burden of disease.”

The Resident Coordinator reminded participants that Iran’s three main human development indicators of life expectancy, income and access to education are good and that the country aims to meet 5 of the 8 Millennium Development Goals.  However, much still has to be done with respect to overall inequality in society and gender inequality.

By looking outside the health sector, Mr. Lewis suggested that when leaders provide an enabling environment with a strong legal framework to enforce sound social policy choices, solutions to inequality could be found.  In this, the Resident Coordinator agreed fully with Madame Ebtekar’s statement that disrupting the balance of nature, increased pollution levels and climate change seriously threatened the rights of all humans to breathe clean air, drink clean water and eat nutritious food.

Mr. Lewis noted that the United Nations, in collaboration with national authorities, has made significant progress in overcoming communicable diseases such as HIV, malaria and tuberculosis. But, now the future focus of the UN and its partners should be on non-communicable diseases and to assisting the citizens of Iran to make better and more informed choices about their lifestyle.

Ending his remarks, Mr. Lewis stated that the positive impact of social and economic factors on health would, in turn, lead to strong social, economic and human development.

“Those of us who make and shape policy need to pay much more attention to the social determinants of health,” the Resident Coordinator concluded, “and the United Nations in Iran stands ready to assist in finding solutions to non-communicable diseases and – of course – cancer.”