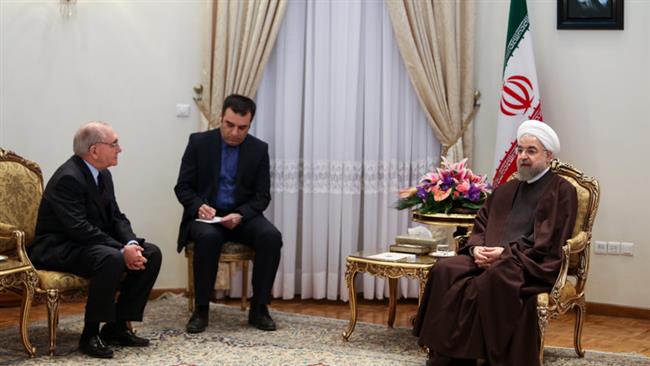 Iranian President Hassan Rouhani has stressed the importance of “political will” to end the dispute over Tehran’s nuclear program.

The current issue between Iran and P5+1 countries “is neither legal nor technical,” Rouhani said at a meeting with Portuguese Foreign Minister Rui Machete in Tehran on Monday.

President Rouhani said the standoff between the sides negotiating over Iran’s nuclear program is political in nature and requires “the political will and determination of both sides” to be resolved.

Referring to the Islamic Republic’s determination to resolve the dispute quickly, he further said that all of Iran’s nuclear activities have been under the supervision of the International Atomic Energy Agency (IAEA) and within the framework of the international regulations.

“Over nearly the past 14 years, the IAEA has made extensive and even surprise inspections of Iran’s nuclear facilities,” but has found no evidence of diversion in Tehran’s nuclear program, Rouhani noted.

Since it is obvious that Iran’s nuclear activities are totally peaceful, pressures on the country over the issue is meaningless, said the Iranian president, and called anti-Iran sanctions a “double-edged sword”.

The Portuguese foreign minister, for his part, said the success of the nuclear negotiations could culminate in extensive cooperation between Iran and the six countries.

Machete further called for the expansion of ties between Tehran and Lisbon.

Iran and the P5+1 countries — the US, France, Britain, China, Russia and Germany – are in talks to secure a final comprehensive deal over Tehran’s nuclear work.

Since an interim deal was agreed in Geneva in November 2013, the negotiating sides have missed two deadlines to ink a final agreement.

Tehran and the six countries now seek to reach a high-level political agreement by March 1 and to confirm the full technical details of the accord by July 1.