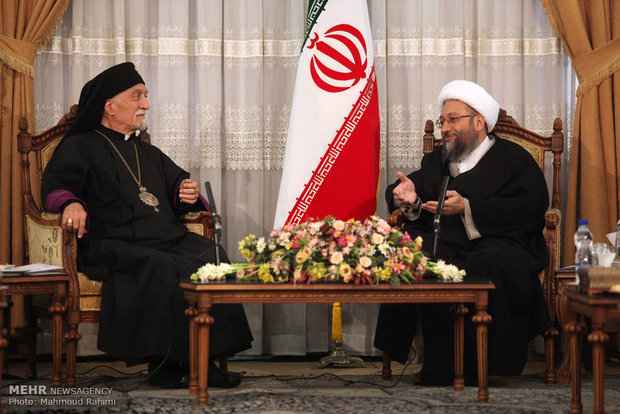 Ayatollah Sadeq Amoli Larijani made the remarks at a meeting with the Patriarch of Armenian Catholic Church Nerses Bedros in Tehran.

Amoli Larijani said the main problem in the world is ‘spiritual vacuum.’ “The reasons and causes of self-alienation and distance from spirituality and monotheistic religions are abound in today world, and religious figures are responsible to introduce the truth of monotheistic anti-oppressive nature of religions to the public.”

He called on the religious scholars to take stance against violence of hegemonic world leaders and Western governments against oppressed people, especially Muslims.

“Due to their influence in the world, Christian religious leaders are expected to take appropriate positions when and where aggression happens against innocent people,” Amoli Larijani underlined.

Amoli Larijani also called for greater engagement of religious scholars and thinkers of the West with the Islamic scholars to approximate religions and increase spiritual trends of the world’s population, stressing that ruthless and aggressive governments keep people away from each other and strengthen their tendency toward materialism and enhance their distance from spirituality.

Larijani said divisive actions like insulting the religions is decried and the recent cartoons published by Charlie Hebdo was a clear violation of over 1.5 billion Muslim’s rights.

The Patriarch of Armenian Catholic Church Nerses Bedros, while acknowledging the issues raised by Ayatollah Larijani, said that spirituality has been declined, especially in Western countries due to the expansion of materialism in the world.