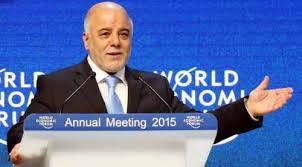 Iraq: Our collaboration with Iran in war against ISIS ‘is not a secret’

The Iraqi Prime Minister, during the World Economic Forum, declared that his country’s collaboration with the Iranian military in waging war against the Islamic State is no secret.

“We do not deny our collaboration with General Qassem Soleimani, the commander of the Iranian Qods Force,” Iraqi PM Haider al-Abadi said during a panel discussion on the sidelines of the forum in Davos, Switzerland, Rudaw reported.

Reuters also noted that Abadi mentioned the Iranian general when discussing Iraq’s fight against the Islamic State (IS, ISIS, or ISIL), a Sunni jihadist group.

“We have respect for him and the Iranian establishment,” reportedly said the Iraqi PM.

“Our collaboration with him is not a secret,” he added, according to Iran’s state-run Islamic Republic News Agency (IRNA).

Abadi claimed that Iranian soldiers have not set foot on Iraqi soil.

The Iraqi leader explained that Shiite Iran filled the gap when the West was slow to deliver help.

“They have been prompt in sending us arms and ammunition without even asking for immediate payments,” said the prime minister.

Iranian Gen. Soleimani has been under an international travel ban and asset freeze by the U.N. Security Council since 2007.

Nevertheless, Rudaw pointed out that the Iranian general has been seen with Shiite militias in Diyala, Iraq, which borders Iran.

A top Iraqi army officer recently said that Diyala has been “liberated” from ISIS.

A U.S.-led coalition has been carrying out airstrikes against ISIS in Iraq and Syria for months to counter the Sunni jihadist group’s advances in those two countries.

Iran, a Shiite majority country, is considered a state-sponsor of terrorism by the United States, but in Iraq Washington and Tehran share a common enemy — Sunni militants fighting under the ISIS banner.

Secretary of State John Kerry reportedly said last year that Iran’s participation in the anti-ISIS campaign would be a “net positive.”