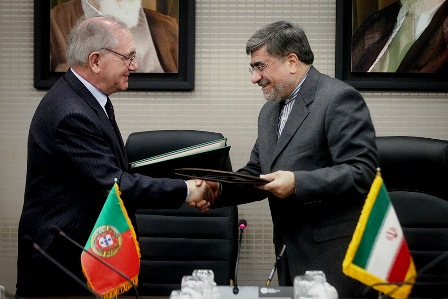 TEHRAN, Jan. 27 (MNA) – During a Tuesday meeting between Iranian minister of culture and Portuguese FM, the two sides signed an MoU to boost cultural interactions.

He referred to the 500 years of relations between the two countries as something unique and outstanding, stressing on its further development through signing the MoU.

“Iran and Portugal have good experiences in the fields of culture, archeology and arts, and we are ready to take the necessary measures for the exchange of these experiences between the two countries,” said Jannati.

He also pointed to Iran’s Cultural Week in Portugal during which various Iranian cultural and artistic works such as films and music were showcased in Lisbon, expressing hope for having the Portuguese artists in Tehran in the near future.

Rui Machete, for his part, stressed his country’s serious efforts for the implementation of the memo’s provisions, hoping Iran and Portugal’s ties would further expand with the signing of various cultural MoUs.