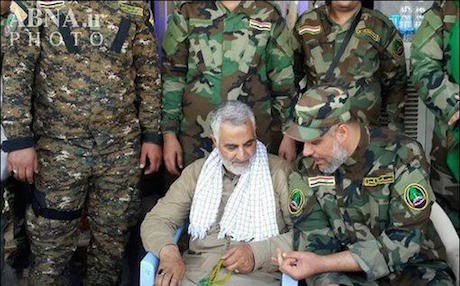 Iraqi PM: We are working with Iranian general in war against ISIS

“We do not deny our collaboration with General Qassem Soleimani, the commander of the Iranian Qods Force,” Abadi said at a panel discussion on the sidelines of the Davos forum.

Iran’s state-run Islamic Republic News Agency (IRNA) quoted Abadi as saying: “We do respect this Iranian commander and our collaboration with him is not a secret.”

Abadi said that Iran was quick in sending arms to Iraq and helping Baghdad when ISIS captured the country’s Sunni provinces last summer.

Soleimani has been under a UN travel ban and asset freeze since 2007. Last year, the UN said that his presence in Iraq was in violation of the Security Council ban.

Earlier this month, Iraqi media outlets reported that Soleimani had been wounded while fighting ISIS near Samara north of Baghdad, but the Iranian foreign ministry denied the news.

Soleimani has been seen with Shiite militias in the northern province of Diyala on several occasions.

Last month, the Paris-based Iranian opposition group Mojahedin-e-Khalq (MEK) said that the number of Iranian officers and soldiers in Iraq had exceeded 7,000.

Last month Iranian General Hamid Taqavi was killed by an ISIS sniper in Samara, which is home to an important Shiite shrine, and his body was transferred to Iran, where a funeral was attended by several thousand soldiers.