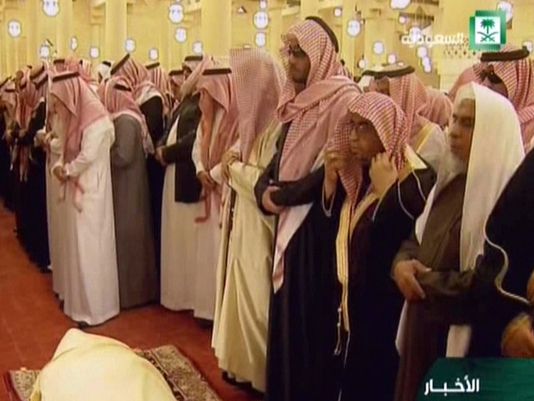 An image from Saudi state TV on January 23, 2015, shows Saudi mourners praying over the body of their late King Abdullah bin Abdul Aziz.

As Saudis mourned the death of King Abdullah and world leaders paid their respects, newly enthroned King Salman pledged Friday to continue the policies of his predecessors while calling for unity among Arab and Islamic nations at a time of regional unrest.

“The Arab and the Islamic nations are in dire need of solidarity and cohesion,” the king said in his first speech after succeeding his half-brother, King Abdullah bin Abdul Aziz.

Abdullah, who was hospitalized with pneumonia in December, died early Friday at the age of 90. The force behind OPEC and a U.S. ally in the fight against al-Qaeda,Abdullah officially ascended to the throne in 2005, but had been de-facto ruler for years before that.

Salman’s call for unity was a clear response to the unrest fomented by the rise of the Islamic State in large parts of Syria and Iraq. But Salman, 79, pledged no abrupt policy changes.

“We will continue adhering to the correct policies which Saudi Arabia has followed since its establishment,” he said.

The one-time defense minister had increasingly taken on the duties of the king over the past year as Abdullah became more incapacitated. Still, Salman’s own health has been a question of concern after he suffered a stroke that left him with limited movement on his left arm.

Abdullah was buried Friday afternoon following a funeral attended by Muslim dignitaries from around the world at the Imam Turki bin Abdullah Mosque in the capital Riyadh. State television showed the king’s body shrouded in a simple beige cloth in line with Islamic tradition.

President Obama said in a statement it was “with deep respect that I express my personal condolences and the sympathies of the American people” to the king’s family and all Saudis. Vice President Joe Biden will lead a presidential delegation to Saudi Arabia to offer condolences.

He also charted a new path by naming his nephew, Interior Minister Prince Mohammed bin Nayef, as deputy crown prince, making him second-in-line to the throne. Mohammed is the first grandson of Saudi Arabia’s founder, King Abdul-Aziz Al Saud, to be named as a future heir.

Salman also appointed his son, Prince Mohammed, as defense minister. The prince, among Salman’s most favored sons, is in his 30s and was head of his father’s royal court when Salman was crown prince.

It was a symbolic recognition of the thinning — and aging — ranks of the sons of King Abdul-Aziz, who provided the line of succession since his death in 1953.

After the funeral, members of the royal family went to Governance Palace to pledge of allegiance to the new king and to the crownd prince, Al-Arabiya reports.

After pledging his allegiance, Grand Mufti Sheikh Abdul Aziz al-Asheikh said: “We have to preserve the blessing of stability in the kingdom.”

Some Islamic militants and their supporters, however, celebrated Abdullah’s death on social media Friday, many of them describing him as a “servant” of the Americans who conspired with the West to kill Muslims.

A man identifying himself as an Islamic State supporter and using the name Abu Azzam al-Najdi criticized the late king on Twitter, saying: “He sent his warplanes to kill Muslims in (Syria). He imprisoned Muslim men and women and wherever there was a war against jihadis, he was the first.”

Abdullah was known for having tried to modernize the ultraconservative Muslim kingdom, including small but important steps to create more opportunities for women.

He was no advocate for democracy, however. He and his fellow Sunni Muslim monarchs saw popular uprisings as threats to their lock on power, and they fought to keep the “Arab Spring” from reaching the Gulf.

His biggest focus was limiting the influence of Saudi Arabia’s main Middle East rival — Shiite Iran. Abdullah also maneuvered to keep the radical Islamic State from posing a direct threat to the House of Saud.

As the Custodian of the two Holy Mosques — his official title — he often pushed back against Washington, earning him a reputation of being less pro-American than his predecessors. Saudi experts said it was undeserved.

“His reputation as anti-American is absolutely untrue,” the late James Akins, a former U.S. ambassador to Riyadh, once said.

The king’s death leaves Queen Elizabeth II, 88, as the world’s oldest-living monarch. Next month she hits her 63rd anniversary on the throne, and on Sept. 10 she will pass Queen Victoria as the longest-reigning British monarch. Victoria is her great-great grandmother.