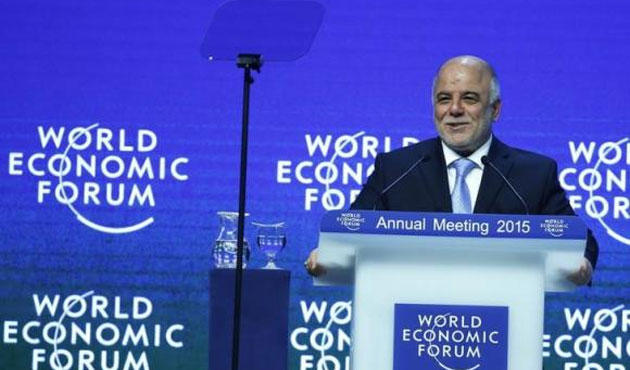 Iraqi PM says West and Iran both helping against ISIS

Iraq’s prime minister said on Friday the West had increased support to his country to help it fight Islamic State, and Iran was also providing crucial backing.

Haider al-Abadi told the World Economic Forum in Davos that help from the West had been slow but had accelerated in recent weeks.

“I have received quite sizeable (amounts of) ammunition free of charge. And we have been promised deferred payments on some arms sales to Iraq,” he said.

The United States and its allies have been carrying out air strikes in both Iraq and Syria to counter last year’s dramatic advances by ISIS, which has declared a caliphate on territory captured in both countries.

Washington and Tehran are at odds on most issues, from Iran’s disputed nuclear programme to the conflict in Syria, but in Iraq they share a common interest in helping Abadi defeat the militants.

Abadi said that while the West was sometimes slow to deliver help, Iran was filling the gap.

“They have been prompt in sending us arms and ammunition without even asking for immediate payments,” he said in comments likely to be noted in Washington, which worries about the extent of Iranian influence over its neighbour.

Abadi made a special mention of Qassem Soleimani – the head of Iran’s elite military Quds Force, one of Iran’s most powerful people – as an ally against Islamic State.

Soleimani, chief of the force which is an overseas arm of the Revolutionary Guards, has been subject to an international travel ban and asset freeze by the U.N. Security Council since 2007.

“We have respect for him and the Iranian establishment,” he said when asked about the role Soleimani played in the fight against ISIS. But he said no Iranian soldier was or had been present on Iraqi soil.