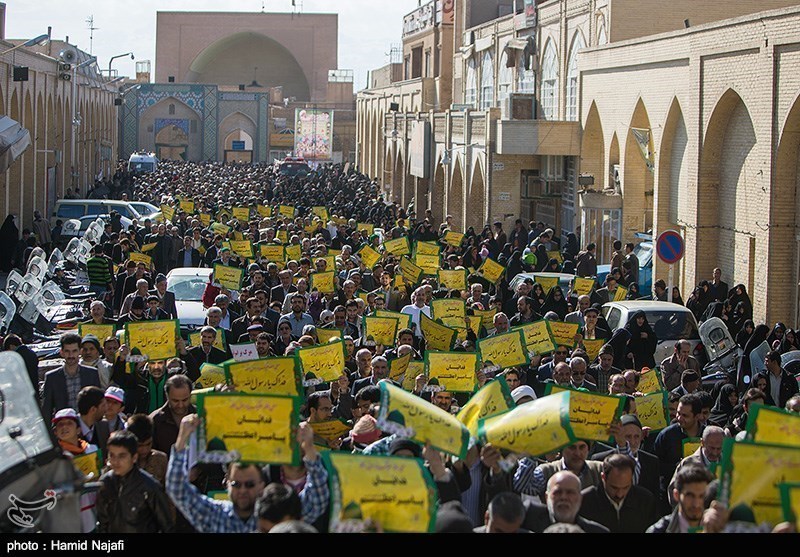 Tens of thousands took to the streets in cities across Iran after Friday prayers to condemn French satirical magazine Charlie Hebdo for publishing a cartoon of the Prophet Muhammad.

The biggest demonstrations were in cities other than Tehran, with state television showing large crowds angered at the depiction of the prophet.

The image was published one week after 12 people were killed by Islamist gunmen at the magazine’s Paris offices because of earlier such cartoons.

“Death to France, death to Israel, death to Britain, death to Charlie Hebdo,” the crowds chanted in southern cities such as Qom and Isfahan, carrying flags and placards in reverence to the prophet.

The protests follow a loud but peaceful demonstration Monday outside the French embassy in Tehran where those gathered called for the ambassador to be expelled.

The cartoon has angered many Muslims as images of the prophet are widely considered forbidden in Islam, and triggered protests in Asia, Africa and the Middle East, some of which turned deadly.

Iran denounced the Jan. 7 massacre in the French capital but it also criticised Charlie Hebdo’s new cartoon, where the prophet holds a “Je suis Charlie” sign under the heading “All is forgiven”.

On Jan. 17, an Iranian newspaper was banned for publishing an “I am Charlie” headline on its front page, words that have come to symbolise the fight for freedom of expression after the Paris attack.