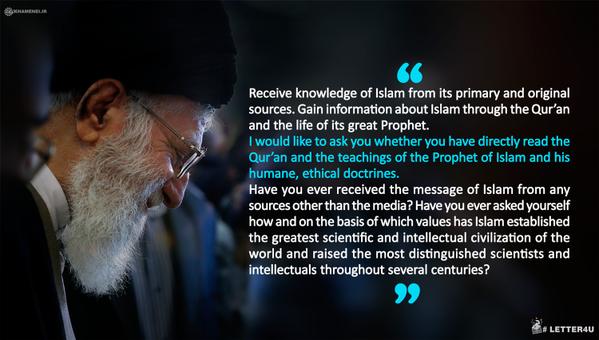 ‘To the youth in Europe and North America’: An unexpected open letter from Iran’s Supreme Leader

Ayatollah Ali Khamenei, known for fiery rhetoric condemning the West as “evil” and the “Great Satan,” sounded a much more temperate note on Wednesday.

In a highly unusual letter published online and shared over Twitter, Khamenei appealed “to the Youth in Europe and North America” to make an effort to understand Islam before condemning it.

“The recent events in France and similar ones in some other Western countries have convinced me to directly talk to you about them,” Khamenei writes, referring to the attacks at the French satirical magazine Charlie Hebdo and a kosher grocery in Paris that have fueled strong anti-Islamic sentiment among some Westerners. The magazine’s new “survivors’ issue,” in turn, has sparked demonstrations in much of the Muslim world against its depiction of the Prophet Mohammed.

Rather than focusing on these specific events, Khamenei tells his readers: “I don’t insist that you accept my reading or any other reading of Islam. What I want to say is: Don’t allow this dynamic and effective reality in today’s world to be introduced to you through resentments and prejudices.”

Khamenei has long said his animosity is directed not at the American people but at their government. In keeping with that notion, he says his new letter isn’t addressed to Western leaders, whom he accuses of intentionally distorting the truth, but to young people who may still have open minds.

“Why does the power structure in the world want Islamic thought to be marginalized and remain latent?” he urges young people to ask.

“Why does the power structure in the world want Islamic thought to be marginalized and remain latent?” he urges young people to ask. “What concepts and values in Islam disturb the programs of the super powers and what interests are safeguarded in the shadow of distorting the image of Islam?”

Answering his own question, Khamenei says Muslims are just the latest in a long series of “others” that Western countries have scapegoated to justify oppression and profiteering. The only way to rectify this misunderstanding, he argues, is for Western youth to come to their own conclusions about Islam by reading the Quran and learning about the life of the Prophet.

Khamenei doesn’t often suggest that degree of optimism about Westerners. Ahead of nuclear negotiations last year he maintained that the United States was outright “evil”; during the protests in Ferguson in August after the killing of unarmed black teen Michael Brown, he tweeted about systemic discrimination in American society with a touch of glee.

Will Western youth actually hear his new appeal? So far, the dozen-something tweets with the hashtag #Letter4U from Khamenei’s official account have received several dozen retweets and likes, but none have gone viral.

This article was written by Justine Drennan for Foreign Policy on January 22, 2015. Justine Drennan is a fellow atForeign Policy. She previously lived in Cambodia, where she reported for the Associated Press, the Phnom Penh Post, and other outlets on topics including politics, human rights, public health, and the Khmer Rouge tribunal.