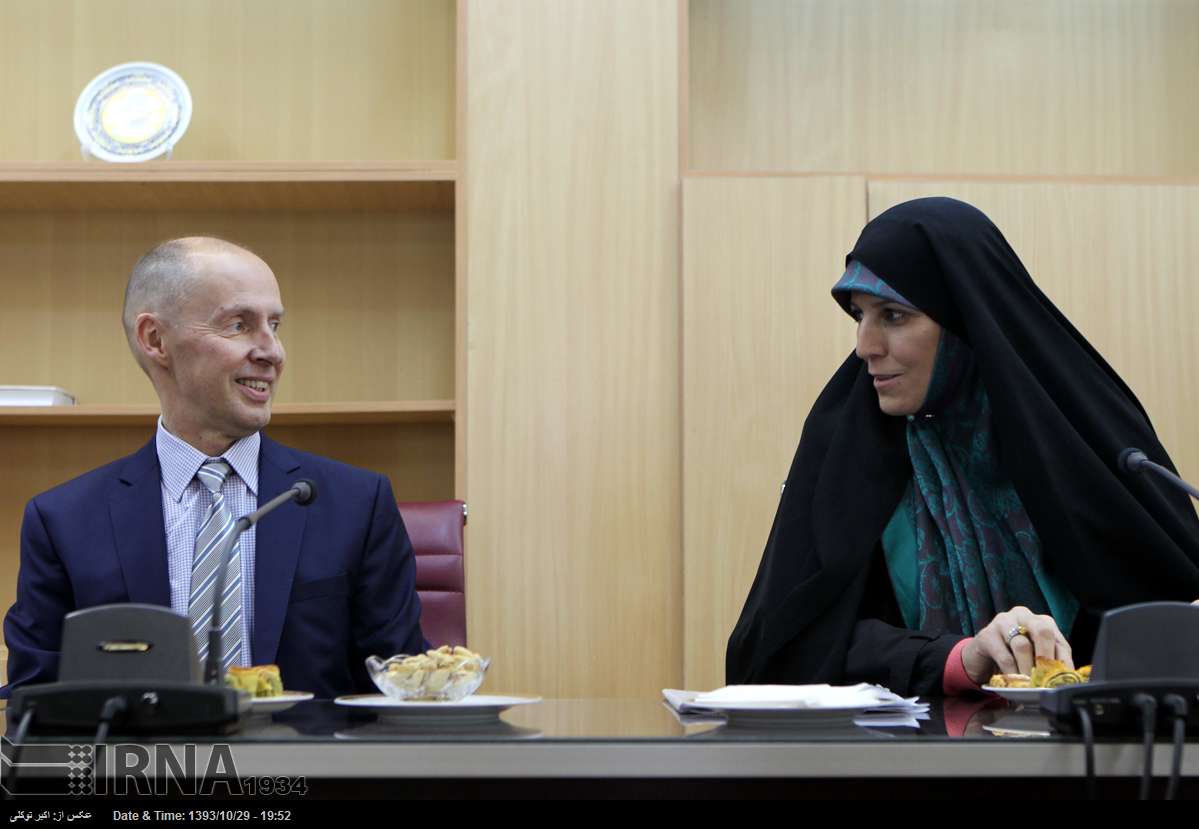 Tehran, Jan 19, IRNA – Vice-President for Women and Family Affairs Shahindokht Molaverdi said on Monday that women and children are the main victims of the arbitrary sanctions.

She made the remarks in a meeting with Finish Ambassador to Iran Harri Kämäräinen.

Molaverdi said that Iran hopes through expansion of relations, extent of the influence would be enhanced.

‘I am confident that during tenure of the Government of Prudence and Hope in line with the strategy of constructive engagement with the world, the relations would get further expanded; I mean the engagement which would be based on mutual respect and the principle of equality of countries.’

She said that regarding cultural, economic and tourism capacities of Iran and Finland expansion of relations will be to the benefit of both countries.

She expressed concern about escalation of violence in the region which has spread to the world.

She hoped that the international community would be successful to eliminate violence and extremism in light of cooperation of all governments.

On nuclear talks, she added that a final agreement would soon be achieved so that through normalization of ties, women and children would get rid of the heavy loss of sanctions.

Despite facing all difficulties over recent years, Iran has been able to gain good achievements in the fields of women and family and Iranian women alike women in other countries face enormous challenges.

Molaverdi said Iran is now in a satisfactory condition in terms of its young population and predictions are worrying that in the near future, Iranian population will move towards old age.

She said sharing experience with other countries in that field is of importance and one of the most successful programs of the Government of Hope and Prudence is to deliver better health services.

Molaverdi said one of the missions of her department is sound implementation of the policies with emphasis on health of mother and child so as to prepare a special supportive package for the female employees health.

She referred to recent visit of a group to Finland and said attention to problem of mothers and children is one of the goals of the study group because studies show that Finland is among countries which has envisaged highest facilities and support for the policies.

She also touched on balance and interaction of the roles of women and men in society and said the issue is also among programs of the Government of Hope and Prudence and is one of the goals of the 6th Five-Year Economic Development Plan.

The official said in light of implementation of the policies, Iran will be able to attain balanced development of the multiple roles of women in the future years as referred to in the 20-Year Vision Plan.

She said that Iran also welcomes exchange of parliamentary delegations and political consultations with Finland. We are also ready to host a Finnish delegation active in the field of women and family.

Kämäräinen for his part said the functions of the Department of Women and Family Affairs are not only beneficial for Iran but for the entire world.

He said his country has since long ago been facing women and family issues to the extent that 110 years ago the first Finnish women was elected as member of parliament after facing the challenge.

He said it is an honor for his country to exchange delegations with Iran and new chapter has opened in bilateral relations since 2014 when Finnish foreign minister visited Iran.