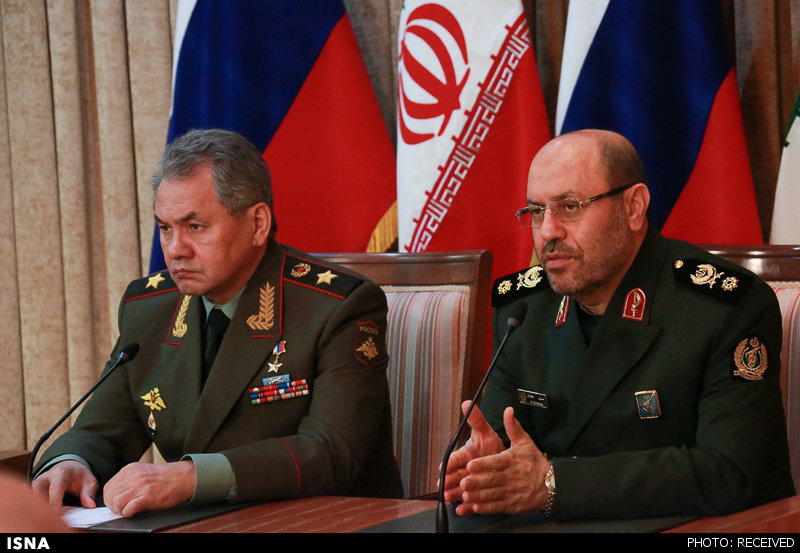 TEHRAN (Tasnim) – Iranian Defense Minister Brigadier General Hossein Dehqan lashed out at Israel for a recent attack that killed a number of Hezbollah forces in Syria, saying the Tel Aviv regime’s policy is based upon disruption of regional and international security.

“These (Israeli) crimes… that have no aim but to disturb security of the region and the world, led to deterioration of the disgraceful and heavy dossier of war crimes of that regime,” Dehqan said on Tuesday.

He made the comments in a meeting with Russian Defense Minister General Sergei Shoigu in Tehran.

Dehqan said the recent Israeli assault on Hezbollah convoy amounts to the continuation of the Tel Aviv regime’s “bloody and terrorist” activities in Palestine, Lebanon, Syria and Iraq and demonstrates that regime’s support for the Takfiri terrorists.

A military helicopter gunship operated by the Israeli army fired two missiles into Amal Farms in the strategic Quneitra region, situated some 60 kilometers (37 miles) south of the capital, Damascus, on Sunday. Six Hezbollah forces were killed in the airstrike.

Elsewhere in his comments, the Iranian defense minister highlighted the significance of Tehran-Moscow cooperation to counter foreign interference in the region, particularly the US expansionism.

“Given the fact that the US and the West have adopted a policy to erode the capacities and strategic infrastructure of the independent countries, Iran and Russia can counter expansionist interference and US excessive demands through cooperation, synergy and activation of the strategic potential,” he added.

At the conclusion of the meeting, the two ministers signed an agreement on defensive and military cooperation.

The agreement calls for the expansion of military cooperation between Tehran and Moscow.

It also includes provisions that entail closer cooperation on “maintenance of regional and international peace, security and stability, and the fight against various types of terrorism, separatism and extremism.”