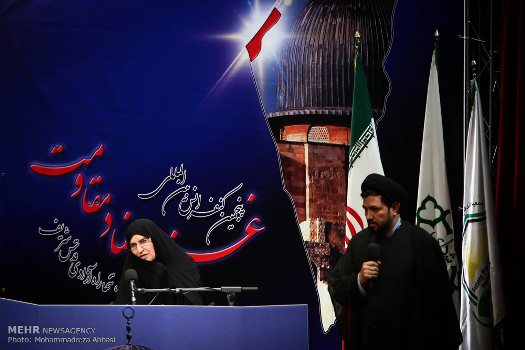 SDPN secretary general: Palestine to be liberated through resistance

Tehran, Jan 18, IRNA – Secretary General of Iran-based Society to Defend the Palestinian Nation (SDPN), Zahra Mostafavi, said on Sunday that late Imam Khomeni and the Islamic Revolution of Iran put liberation of Palestine on the agenda of the Islamic Ummah.

The culture which stems from Islamic revolution brought about a massive change in the region and in Palestine in particular, she said.

She made the remarks in the international gathering themed ‘Gaza, symbol of resistance’ in Tehran on Sunday.

Stiff resistance of people in Gaza prevented total occupation of the region regarded as a significant turning point disrupting the Zionist regime’s calculations, she said.

The Zionist regime employed all its facilities and capabilities to seize Gaza but received a very humiliating defeat due to the brave resistance of Palestinians in Gaza, she said.

In fact, the culture of Islamic revolution has created a very significant juncture in regional developments mainly in Palestine, Mostafavi said.

Resistance movement proved it is a suitable strategy for liberation of occupied Palestine, she said.

Resistance has introduced a new approach for all Palestinians whether in Gaza or West Bank along with other freedom seekers around the globe, she said.

Gaza and West Bank are now regarded as a united front in the struggle with atrocities of the Zionist regime, she said.