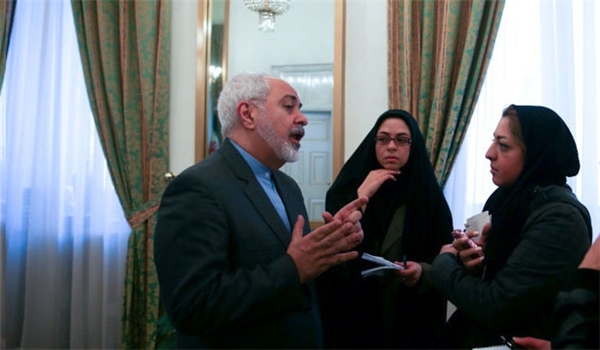 “The violent acts unfortunately conducted in our region and insult to the sanctities are both the manifestations of extremism,” Zarif told reporters in Tehran on Monday.

“We condemn the extremism shown through insulting the sanctities, and we have played a pioneering role in this regard,” he added.

Lamenting that those who insult other people’s sanctities and values sow the seeds of hatred and extremism, he said the same extremism leads to the killing of innocent people in the region and the looting of their properties by the terrorists.

“This is a common pain which should be thought about by the western states and those who spread extremism should be confronted,” Zarif underlined.

His remarks came after the French satirical magazine, Charlie Hebdo, went on sale with its cover showing a sacrilegious cartoon of Islam’s Prophet Mohammad (PBUH), only a week after gunmen murdered eight journalists and four others at its offices in Paris.

The move has hurt the sentiments of over a billion Muslims throughout the world and caused angry protests in many world states.

The Iranian foreign ministry on Wednesday deplored the publication of the blasphemous Cartoon, describing it as a “provocative” and “insulting” move.

“We condemn provocative moves and in our view, the weekly’s action is insulting and we condemn it completely since it will provoke and hurt Muslims’ feelings across the world and will create a sequence of extremism in the world,” Foreign Ministry Spokeswoman Marziyeh Afkham said in Tehran on Wednesday.

She stressed that respecting the beliefs, values and sanctities of different religions was a globally accepted principle and European statesmen are expected to heed such norms.

Afkham underscored that it was not enough for the western governments to admit to their wrong policies, and they needed to adopt correct decisions which serve the interests of the followers of all religions and nations.

Earlier this month, the ISIL terrorist group attacked the weekly after it released a cartoon of ISIL leader Abu Bakr Al-Baqdadi. At least 12 people were killed when masked gunmen stormed the Paris offices of Charlie Hebdo and opened fire.

The same day, Afkham condemned the attack, and said any act of terrorism against innocent people is opposed to Islamic teachings.