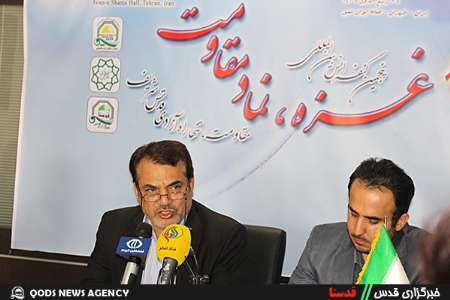 Tehran, Jan 17, IRNA — One hundred researchers have joined a conference on the Palestinian resistance that is set to be held in Tehran on Sunday, director of the conference said.

Hossein Rouyvaran told reporters that 71 articles have been approved to be included in the conference’s proceedings, adding that five top articles will be awarded.

The conference director also said two foreign guests from Iraq and Canada will present their papers during the conference, qodsna.com reported.

Titled ‘Gaza, symbol of resistance’, the conference will examine the threats and assets of the regional anti-Israeli resistance as well as the prospect of PA-Israel talks among others.

The panel debate will also consider the gains of the Palestinian resistance in its battle against the Zionist regime in the 22-day war on Gaza in 2008-9 in the sixth anniversary of the major Palestinian military feat.

Iranian Parliament Speaker Ali Larijani and Representative of the Palestinian Islamic Jihad movement in Tehran, Naser Abu Sharif are among the lecturers scheduled to talk in the conference.

The conference runs the motto of “resistance, sole path to liberate the Holy Qods” and will be chaired by the Secretary General of Iran-based Society in Defense of the Palestinian Nation (SDPN), Zahra Mostafavi.

It has been co-organized by the Qods News Agency and the SDPN that serves as the largest pro-Palestinian NGO in the Islamic Republic.

January 19 has been designated by the Iranian parliament as day of Gaza in the Iranian calendar.