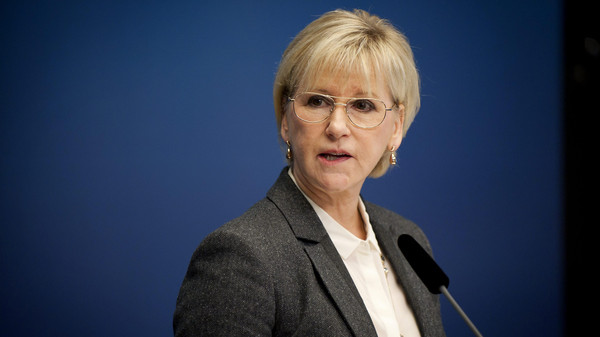 Swedish FM Margot Wallstrom will not be visting Israel following remarks made by her Israeli counterpart. (File photo: The Associated Press)

Sweden’s Foreign Minister Margot Wallstrom has slammed Israel over its reaction to Stockholm’s recognition of the Palestinian state, stressing that Tel Aviv is crossing all boundaries.

Speaking to Dagens Nyheter, a popular Swedish daily, the minister said the overall reaction of Israel to Sweden’s recognition of the State of Palestine had been expected, but that Tel Aviv’s latest comments were unacceptable.

“They have a rhetoric that crosses all lines,” she said.

Her remarks came after Emmanuel Nahshon, the Israeli Foreign Ministry’s spokesman, said on January 15 that the Swedish foreign minister would have been rejected by the regime’s officials if she had traveled to the occupied territories.

According to Israeli media reports, Israeli Foreign Minister Avigdor Lieberman has refused to meet with his Swedish counterpart.

Earlier in January, Wallstroem postponed her scheduled visit to the occupied territories following the escalation of tensions between Sweden and Israel over Stockholm’s stance toward the issue of a Palestinian state.

“It is unacceptable how they have been talking about us and everybody else,” Wallstrom told the newspaper in her interview.

“It has not only irritated us, but the Americans and everyone who has anything to do with them right now,” she added.

Relations deteriorated between the two countries after the Swedish government officially recognized Palestine as an independent state last October amid fury from the Israeli regime.

Sweden’s move set off a domino effect among other European parliaments, which in quick succession voted in favor of similar motions.

On October 30, Tel Aviv recalled its ambassador to Stockholm, Isaac Bachman, after Sweden’s official recognition of the Palestinian state.

Tel Aviv, however, has refused to return to the 1967 borders and is unwilling to discuss the issue of al-Quds.