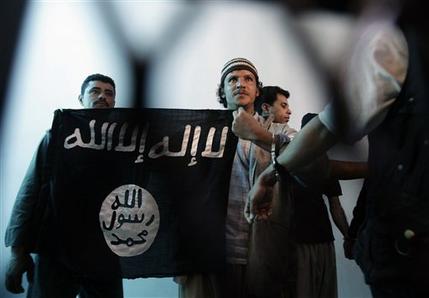 FILE – In this April 23, 2013 file photo, a suspected Yemeni al-Qaida militant, center, holds an Islamist banner as he stands behind bars during a court hearing in state security court in Sanaa, Yemen. A top leader of Yemen’s al-Qaida branch has claimed responsibility for last week’s attack on a Paris newspaper when two masked gunmen killed 12 people, including much of the weekly’s editorial staff and two police officers. Nasr al-Ansi, a top commander of Al-Qaida in the Arabian Peninsula, or AQAP as the branch is known, appeared in an 11-minute Internet video posted Wednesday, Jan. 14, 2015. (AP Photo/Hani Mohammed, File)

CAIRO (AP) — Yemen’s al-Qaida branch on Wednesday claimed responsibility for last week’s deadly attack on a Paris satirical newspaper, with one of its top commanders saying the assault was in revenge for the weekly’s publications of cartoons of the Prophet Muhammad, considered an insult in Islam.

The claim came in a video posting by Nasr al-Ansi, a top commander of Al-Qaida in the Arabian Peninsula, or AQAP as the branch is known, which appeared on the group’s Twitter account.

In the 11-minute video, al-Ansi says the assault on Charlie Hebdo, which killed 12 people – including editors, cartoonists and journalists, as well as two police officers – was in “revenge for the prophet.”

He said AQAP “chose the target, laid out the plan and financed the operation” against the weekly, though he produced no evidence to support the claim.

The assault was the beginning of three days of terror in France that saw 17 people killed before the perpetrators, three Islamic extremist attackers, were gunned down by security forces.

The two brothers, Said and Cherif Kouachi, who carried out the Charlie Hebdo attack were “heroes,” al-Ansi said.

Al-Ansi accused France of belonging to the “party of Satan” and said the European country “shared all of America’s crimes” against Muslims – a reference to France’s military offensive in Mali.

He also warned of more “tragedies and terror” in the future.

Washington considers AQAP as al-Qaida most dangerous offshoots. Formed in 2009 as a merger between the terror group’s Yemeni and Saudi branches, AQAP has been blamed for a string of unsuccessful bomb plots against American targets.

These include a foiled plan to down a Detroit-bound airliner in 2009 using a new type of explosive hidden in the bomber’s underwear, and another attempt a year later to send mail bombs hidden in toner cartridges on planes bound to the U.S. from the Gulf.

The Charlie Hebdo strike is the Yemen-based branch’s first successful strike outside its home territory – and a triumph for its trademark double-strategy of waging jihad in Yemen to build its strength to strike abroad.

At least one of the two brothers involved in the attack on the weekly traveled to Yemen in 2011 and either received training from or fought alongside the group, authorities say. A U.S. intelligence assessment described to the Associated Press shows that 34-year-old Said Kouachi was trained in preparation to return home and carry out an attack.