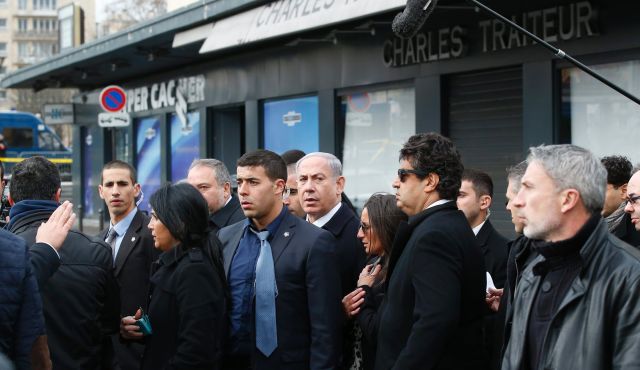 Prime Minister Benjamin Netanyahu at the kosher supermarket in Paris where four hostages were killed on Friday in Paris, Monday, Jan. 12, 2015. Photo by AP

Benjamin Netanyahu finds out he missed the bus: An uncomfortable look at the prime minister’s embarrassing trip to France.

The Paris trip was supposed to be good for Benjamin Netanyahu. The anti-terrorism march, held on Sunday in Paris in the wake of last week’s gruesome attacks and which broke attendance records,alongside solidarity marches across France, with an estimated 3.7 million participants, was supposed to provide the Israeli prime minister with plenty of opportunities to present himself at his diplomatic best: marching shoulder-to-shoulder with the likes of German Chancellor Angela Merkel, holding hands with leaders of the free world, positioning himself as one of the leaders in the battle against global terrorism. This was all supposed to remind the world of Netanyahu as powerful, authoritative, internationally-renowned.

That was not at all what happened. Netanyahu’s trip to Paris turned into a series of unfortunate humiliations. First, there was the fact that he had been asked, by French President Francois Hollande, not to attend the march in an effort to keep the Israeli-Palestinian conflict out of Europe’s show of unity. Netanyahu initially planned not to go, but he changed his mind after learning that his two main competitors in the upcoming election for the votes of the Israeli right-wing, Foreign Minister Avigdor Lieberman and Economy Minister Naftali Bennet, would be attending.

Then there was the matter of the march itself, which supplied Netanyahu’s political rivals with a enough images, videos, gifs and memes for four election campaigns, not one.

Netanyahu was captured by news cameras elbowing his way into the front row, gently pushing aside the President of Mali Ibrahim Boubacar Keita. The French weekly Paris Match later reported that Netanyahu’s place in the front row (alongside Palestinian President Mahmoud Abbas) was in fact determined by the organizers of the rally, but by that point the videos showing Netanyahu’s break into the first row were already out. The damage was done.

During the march Netanyahu was caught off-guard again, waving to the crowd in response to a pro-Israel shout from the audience, looking rather cheerful in comparison to his grim and somber compatriots, who kept their cool and did not respond to the crowd.

Of course, Netanyahu’s biggest humiliation was a video that has since gone viral, in which he is seen waiting for a bus to take him to the rally, after missing the bus that ferried other world leaders to the march.

The footage, captured by a French TV station, is remarkable: The prime minister of Israel looks nervous, dejected, beaten down, surrounded by his security detail yet still standing in the middle of the street, looking exposed to danger in a way world leaders should never be. Netanyahu appears furious, annoyed, confused, trying to busy himself with talking on his phone or fixing his hair, constantly looking over his shoulder to check whether his bodyguards are still there. Even the French news anchors had to sympathize with his distress.

In no time, Netanyah’s anguish over the bus like was memefied and joked about. His gauche waving became the subject of scorn and derision, his apparent shoving the subject of intense criticism.

“Such behavior as cutting in line, sneaking onto the bus by pushing and shoving, using elbows to get to the front at some event is so Israeli, so us, so Likud Party Central Committee, that I want to shout: “Je suis Bibi!”wrote my Haaretz colleague columnist Yossi Verter.

Netanyahu’s Paris disaster could be seen as a campaign stunt that backfired. Lieberman and Bennett had visits that were far more productive, devoid of PR disasters. Or one could see it as something more sinister: a disturbing glimpse into the level of isolation Israel has reached under Netanyahu, and an even more disturbing glimpse at its possible future.

Netanyahu, after all, is not a private person. He is an elected official, the elected leader of the State of Israel. Gauche manners aside, the way that world leaders treat him is a reflection of what the world thinks of Israel. It wasn’t just Netanyahu who was excluded from the bus — it was Israel itself. Or, more accurately, its current policies — its constant building in West Bank settlements, its disregard for human rights, its unwillingness to negotiate with the Palestinians, its narrowing democracy — of which Netanyahu is the chief representative.

The France that left Netanyahu out in the cold is, after all, the same France that has repeatedly condemned Israel in the past 12 months, over its construction in East Jerusalem and its conduct during this summer’s Gaza war. It was only a month ago that Netanyahu himself called Hollande and beseeched him to halt the French initiative to have the UN Security Council set a two-year timetable for reaching a permanent agreement between Israel and the Palestinians, including a Palestinian state. (France eventually sided with the Palestinians). The Palestinians’ Security Council bid ultimately failed, but the animosity toward Netanyahu among European nations (and the Obama administration) remained.

Even if what happened to Netanyahu in Paris was not deliberate — and given the obvious security hazards, it is more plausible that it was not — it is still a stunning metaphor for the depths of isolation Israel has reached in recent years. One video of Israel’s prime minister, waiting in the cold for a bus that’s not coming, speaks more loudly than a hundred resolutions recognizing a Palestinian state.

Israel begins 2015 with its international status at a record low, its supporters dwindling. It is a liability, a burden. Netanyahu, as prime minister, put it there.

Unfortunately, the joke isn’t just on Netanyahu. It’s on the country that elected him and that might soon reelect him.