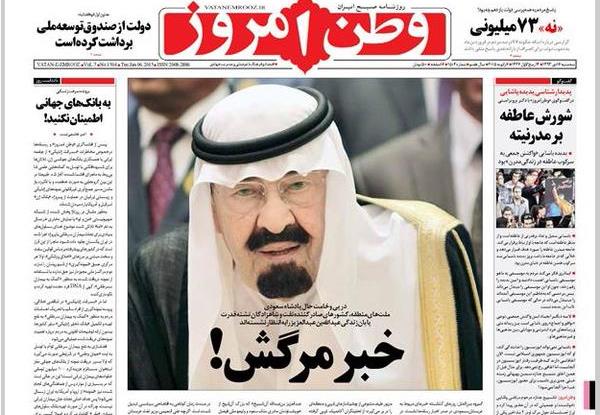 Tehran (AFP) – An Iranian newspaper was told Monday it faces a court hearing over an article which is allegedly offensive to Saudi Arabia’s ailing King Abdullah.

The king, who is breathing with the help of a tube due to pneumonia, is in hospital in Riyadh, prompting frenzied debate about the future of the oil-rich Gulf state.

Iranian newspapers are running daily reports on his health, partly explained by an often tense relationship — most recently over falling world oil prices — between the Sunni kingdom and Tehran’s Shiite regime.

Vatan-e-Emrooz, a conservative daily, has been summoned over a front page story on January 6 headlined with a Persian expression often interpreted as “may I hear the news of his death”.

Use of the expression — Khabar-e-Margesh — is usually regarded as an insult.

The official IRNA news agency said Vatan-e-Emrooz was summoned because its report may have “violated national interests,” but it did not say when a court hearing would take place.

The story also carried sub-headings, including; “Signs of collapse of Saudi Arabia,” “Death of Abdullah and $200 oil,” “Wahabism equals terrorism,” and “Crisis of succession of Abdullah.”

Saudi Arabia is the world’s largest oil exporter and the biggest producer in the Organisation of the Petroleum Exporting Countries, to which Iran also belongs.

In a letter to Iran’s media regulator, the Vatan-e-Emrooz editor defended the Abdullah report, saying his health is the focus of unprecedented attention, according to Mehr news agency.

He said the allegedly offensive words were “a colloquial expression in our culture which in this case was used against one of the most hostile enemies of the people of Iran and whose hands are stained with the blood of tens of thousands of innocent people in Syria, Iraq, Bahrain and Yemen.”

While Riyadh says it is financially strong enough to withstand the drop in oil prices by around 50 percent in the past year, the budgets of Iran and other oil sales reliant nations are under strain.

The Iran-Saudi relationship deteriorated when they took opposite sides on the war in Syria, with Riyadh supporting rebels while Tehran backs President Bashar al-Assad’s regime.

In the past eight months, however, Tehran has made a strong diplomatic push to improve ties, although the oil price slump has led top Iranian officials to implicitly criticise the kingdom’s oil policies.