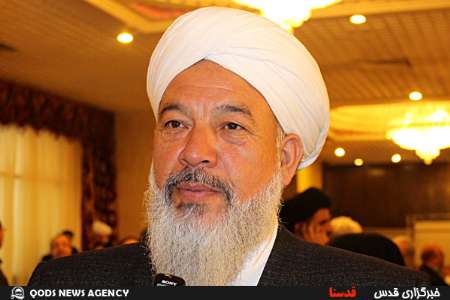 Unity of Muslims would set stage for liberation of Palestine

Tehran, Jan 8, IRNA – A Sunni Muslim scholar from Iran says everyone must come to the help of the Palestinian nation, adding that the mission is a Quranic call.

Seminary instructor in the northern Iranian province of Golestan, Abd al-Jabbar Akhound Mirabi was speaking to Qods News Agency on the sidelines of an international conference in Tehran on Muslim unity.

“God has promised to help the oppressed to get free and for the same reason I am sure the Palestinians will be set free from the claws of the Zionists,” the scholar said.

In another regard, the Sunni Alim said the Palestinian people have remained steadfast against the Zionists and God would remain on their side.

The Alim expressed hope the Palestinian Muslims would gain victory in the near future.

The Muslim scholars and activists who have joined the conference focused on the Palestinian issue in the second day of the event on Thursday.

The conference that is the 28th edition of the unity conference started in Tehran on Wednesday under the banner of ‘single Muslim community, challenges and solutions.’

The scholars also underlined the role of hostile states in the emergence of the ISIL terror group and its negative effect on the Palestinian issue.