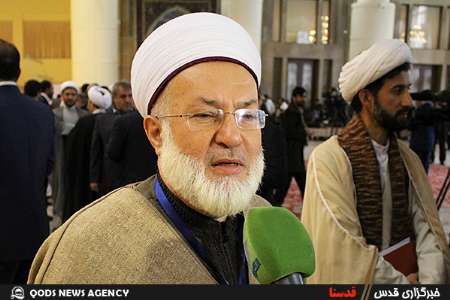 Muslims must turn their compass towards Palestine: scholar

Tehran, Jan 9, IRNA – A senior Lebanese scholar says the enemies of the Muslim community are bent on distracting the Muslim attention from the Palestinian issue through promoting the ISIL terror group and its likes.

Chancellor of the Lebanese Islamic Dawa University, Abd al-Naser Jabari was speaking to Qods News Agency on the sidelines of an international conference in Tehran on Muslim unity.

The university chairman said the Muslim must strive to keep the Palestinian issue top on their political agenda.

“Our compass must face Palestine because Zionists are our true enemies,” the scholar said.

The Lebanese personality also reaffirmed the idea that the Islamic Republic of Iran has been the sole state which has steadfastly supported the Palestinian issue since long past.

Jabari said the Zionist regime was heading towards an ultimate doomed fate and that Palestine and the occupied al-Quds (‘Jerusalem’) would return to their true owners, the Palestinian nation.

The Muslim scholars and activists who have joined the conference focused on the Palestinian issue in the second day of the event.

The conference that is the 28th edition of the unity conference started in Tehran on Wednesday under the banner of ‘single Muslim community, challenges and solutions.’

The scholars also underlined the role of hostile states in the emergence of the ISIL terror group and its negative effect on the Palestinian issue.