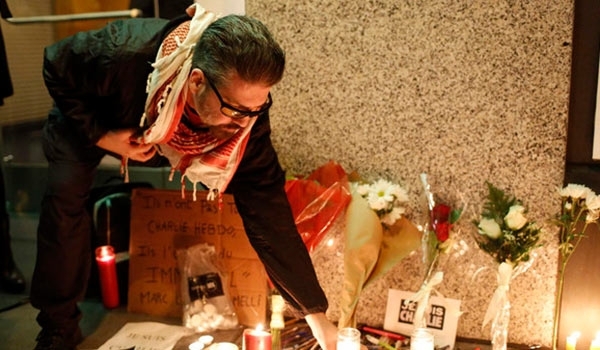 TEHRAN (FNA)- In the aftermath of Wednesday’s extremist attack in Paris, Muslim unions and leaders expressed outrage at the “barbaric” targeting of the Charlie Hebdo magazine headquarters, which left 12 people dead.

CFCM said the bloody shooting was also “an attack against democracy and the freedom of the press.”

The Muslim Council of France, and of Britain, also denounced the attack.

The Council on American-Islamic Relations (CAIR), the US largest Muslim civil rights and advocacy organization, offered its sincere condolences to the families and loved ones of those killed or injured in this attack.

“We also call for the swift apprehension of the perpetrators, who should be punished to the full extent of the law,” it said.

CAIR also added that “we strongly condemn this brutal and cowardly attack and reiterate our repudiation of any such assault on freedom of speech, even speech that mocks faiths and religious figures.”

It added, “The proper response to such attacks on the freedoms we hold dear is not to vilify any faith, but instead to marginalize extremists of all backgrounds who seek to stifle freedom and to create or widen societal divisions.”

The 57-member organization said terrorist acts represent Islam’s “biggest enemy” and are “incompatible with Islamic values and all human principles and ethics.”

“OIC hopes that the culprits would soon be apprehended and presented to justice in France, conveying condolences to the families of the victims, the French government and people and wishing the injured quick recovery.”

The Muslim Canadian Congress also deplored the attack while the National Council of Canadian Muslims (NCCM) said justice must be served immediately.