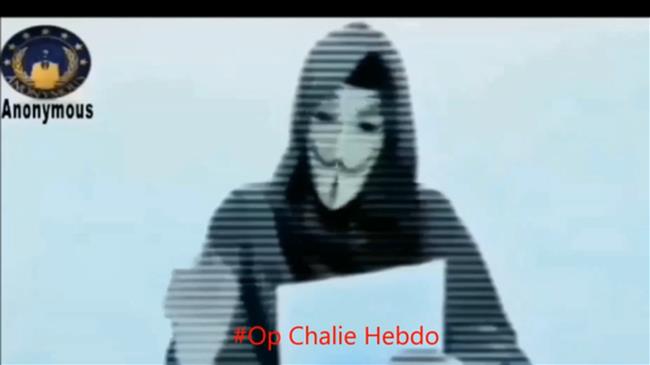 This photo shows a member of Anonymous vowing revenge attacks on Takfiri groups.

A Belgian branch of the hacker group Anonymous has declared a war on ISIL and al-Qaeda terrorist groups in revenge for a recent deadly attack on the Paris office of the satirical weekly magazine Charlie Hebdo.

In a video uploaded to YouTube on Friday, a French-speaking masked member of Anonymous, which is a loosely associated international network of activist and hacktivist entities, said, “We will track you down — every last one — and will kill you” in a new campaign against Takfiri groups, called #OpCharlieHebdo.

“You allowed yourselves to kill innocent people, we will therefore avenge their deaths… We will not let your stupidity kill our liberties and our freedom of expression. We have warned you; expect your destruction.”

He said that his group decided to “declare war on you, the terrorists” in the wake of the Wednesday attack, in which a dozen people were murdered.

“We do not forget. We do not forgive. Be afraid of us, ISIL and al-Qaeda — you will get our vengeance,” the spokesperson said at the end of the footage.

On Friday, two brothers, Said and Cherif Kouachi were killed after being cornered at a printing workshop with a hostage in the town of Dammartin-en-Goele, northeast of Paris. The two had earlier released the hostage.

They were suspected of slaughtering eight journalists, two police officers, a maintenance worker and a visitor at the headquarters of Charlie Hebdo.

French police also ended a second hostage-taking in a supermarket in the eastern Porte de Vincennes area of Paris on Friday, killing one armed hostage-taker, Amedy Coulibaly, who was a suspect in the Thursday killing of a policewoman in southern Paris.

Officials say that four hostages were also killed during the raid.

It has still not been verified if Coulibaly had an accomplice during the hostage taking or acted alone. Before the incident, police issued an appeal saying they were searching for Coulibaly and a 26-year-old woman named Hayat Boumeddiene in relation to the policewoman’s killing.

French police and intelligence services have been facing mounting criticism over their lack of intervention before the attack on Charlie Hebdo.

One of the main suspects of the Wednesday attack had reportedly been convicted on terrorism charges and another is thought to have had links to Yemeni al-Qaida militants. According to a US official, both suspects were on the US no-fly list.

The ISIL Takfiri group has claimed responsibility for the attacks, threatening to target the United States and Britain next.