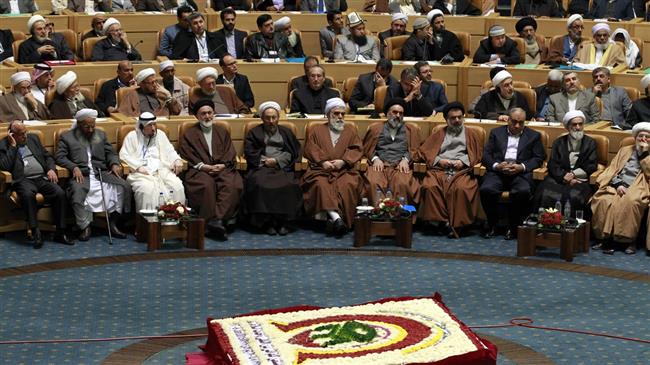 Muslim scholars from 60 countries attend a session of the 28th International Islamic Unity Conference in Tehran on January 7, 2015.

Palestinian resistance movement Hamas has warned against attempts to create division among Muslims, calling on all Islamic states to stand by the Palestinian nation in its struggles against Israeli atrocities.

Speaking on the sidelines of the 28th International Islamic Unity Conference in Tehran, Khaled al-Qaddumi, the representative of Hamas in Iran, highlighted the cultural and religious commonalities among Muslim countries and stressed the need for them to set aside their differences.

The Hamas official described resistance as the only way for Palestinians to end the Israeli regime’s occupation of their lands, urging the Islamic states to throw their weight behind the Palestinian nation.

Qaddumi further criticized the UN Security Council for failing to adopt a resolution on the Palestinian statehood last December, saying the international community must adopt practical measures in support of the Palestinians.

The Tehran conference, titled Unified Islamic Ummah: Challenges and Strategies, is underway with the participation of hundreds of Sunni and Shia scholars and intellectuals from more than 60 countries.

The participants are discussing ways to promote unity and solidarity in the Muslim world and focus on the problems facing the Islamic world, such as the threat posed by Takfiri militants and the Palestinian cause.