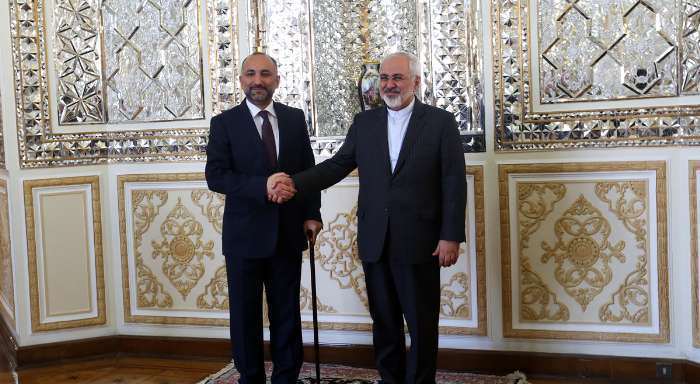 Tehran, Jan 6, IRNA – Foreign Minister Mohammad-Javad Zarif said on Tuesday that Iran is ready for expansion of cooperation with Afghanistan to consolidate stability.

He made the remarks in a meeting with Afghan National Security Advisor Hanif Atmar.

Zarif said that the approach of the Government of Hope and Prudence is to expand ties with the neighbors and emphasized the need for cooperation with the new government of Afghanistan.

He said Iranian Foreign Ministry is ready to establish cooperation to consolidate stability and security in Afghanistan.

Referring to recent presidential election in Afghanistan, Zarif said outcome of the democratic election resulted in formation of the national unity government and that the Islamic Republic of Iran supports the aspirations of the Afghan people.

Welcoming the visit of Afghan officials to Iran, he termed it as an important step to promote regional cooperation on various dimensions.

Atmar for his part thanked Iran on behalf of the Afghan government for its strong friendship and affinity in tough years Afghanistan was passing. He said, ‘We will never forget Iran’s humanitarian assistance to the Afghan people.’

Promotion of relations with Iran on all bilateral and multilateral dimensions is among priorities of policies of the National Unity Govenrment of Afghanistan, he added.

Re-inviting Zarif to visit Afghanistan, Atmar said Afghan senior officials are willing to visit Iran in the near future. He hoped that the comprehensive accord for cooperation will be compiled and signed by Iran and Afghanistan soon.

Describing Iran’s exceptional ‘key’ position for expansion of cooperation with Afghaistan in transit and trade of goods and services, the official highlighted significance of mutual economic cooperation and underlined further cooperation in such fields as campaign against terrorism and drug-trafficking.